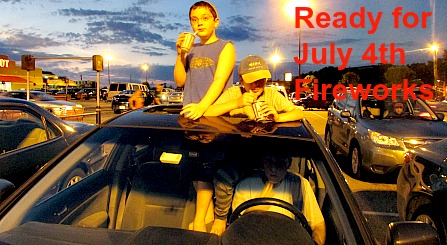 My mother made plans. At 5:00, the family would gather at our house for a barbecue. Lovely. After all, it was July 4th and barbecuing is one of those Independence Day things to do along with seeing fireworks, having picnics, watching baseball, etc.

But there was a problem. We didn’t have a grill. Well, not exactly. We had the unopened box from Sears with all the parts of a grill.

All we had to do was put it together. My father and I that is.

Now, my father had a number of good qualities that he passed down to me and we shared – love of sports, sense of humor, an appreciation for ice cream, etc.

However, he was near awful when it came to putting things together and doing anything that required tools. By the way, he loved models and bliss for him included putting together a model and painting it (and eating some ice cream as noted above or just about any sweet). Yet putting together anything that was bigger than a model airplane or trane – well that wasn’t a strength of his. To put it mildly.

And I inherited this trait too.

For my father, it was always about the proper tools. He’d search our garage which had more junk than Fred Sandford’s lot. I’m not so sure my father wanted to find the tool he was looking for. If he didn’t find the tool, he could blame the construction issues on not having the proper tools. And he always did as well as swear that we had the tool somewhere. I can assure you I wasn’t going into the garage to play with the tools.

Maybe, the tool was somewhere in that mess of a garage, but it wouldn’t appear again till it was unneeded.

Anyway, we got outside early and took out all the parts for the grill. We separated the parts and stacked them neatly. Then, we looked at the instructions – there must have been 87 steps. To clarify, it’s not like we were building some ornate fire pit. It was probably a glorified hibachi. However, it was electric – hence the complications.

After a sigh and silent, oh crap, we proceeded. We had seven hours to figure this out as my mother wanted to start cooking by 4:00.

As the day dragged on, we made halting progress. There were meltdowns, questioning if the barbecue looked like the picture, panic attacks, and consideration of ordering pizza. More than a few times, we questioned what my mother was thinking.

At around 3:00, the barbecue looked pretty much like the picture, and we only had a few missing parts. We, in our mechanical wisdom, deemed them unnecessary.

There was one final step. We had to make sure the grill would light. The grill was supposed to light with a simple turn of a knob. However, something went wrong (we could blame the manufacturer?) and my father, and I determined we would light a match, throw it in, and turn the knob at the same time.

Before making sure the grill would burn, we took a break. We had a cold drink and looked at our creation.

After we couldn’t nurse our drinks any more and with go time ticking closer, we approached the grill.

My father lit the match and turned the nob. And nothing happened.

He tried again. Nothing happened.

After making a bunch of suggestions and him repeating, “I did that,” we decided to try together.

He would light the match, and I would turn the knob.

I had visions of the grill exploding and us having our own July 4th fireworks.

As my father dropped the burning match in, I turned the knob. And jumped back. Hey, I prefer pizza. Anyway, as I jumped back, I smacked into my father who had also taken a few steps back.

My father and I looked on together as the fire caught. We had put together a working grill. Now, it didn’t look exactly right and it made some odd noises, but that night the family had barbecue and everyone was happy.

We did it. My father and I saved Independence Day. We had our family barbecue and later went to July 4th fireworks.

P.S. I am the only person in the suburbs who does not own a barbecue. I still prefer pizza. 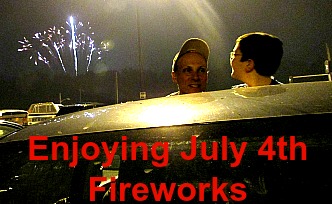