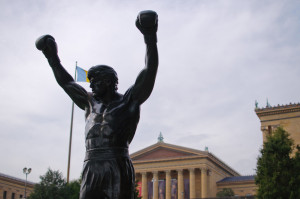 Iconic Rocky statue in front of the Philadelphia Art Museum.

Where are you from?

This question often serves as an icebreaker when people first meet each other. The right answer can start a conversation and forge a connection.

For me, this question is not so simple.

As a reminder, I’m a literal person.

This past Sunday night my family and I watched Rocky. For BR and SJ as well as Mrs. MMK, it was the first time seeing the classic. I had seen the movie and its offshoots many times.

Before Rocky began, I gave them some background about the movie.

As we watched the movie, the three of them got into it. I pointed out that Rocky was treated with disrespect, as if he was a bum. Yet, he was a decent person. Rocky refused to hurt a man who would not pay his debts, he tried to help a young girl hold on to her reputation, he accepted Mickey’s help which enabled the old trainer to regain some of his past glory.

In the scene before the fight, Rocky tells Adrian:

Ah come on, Adrian, it’s true. I was nobody. But that don’t matter either, you know? ‘Cause I was thinkin’, it really don’t matter if I lose this fight. It really don’t matter if this guy opens my head, either. ‘Cause all I wanna do is go the distance. Nobody’s ever gone the distance with Creed, and if I can go that distance, you see, and that bell rings and I’m still standin’, I’m gonna know for the first time in my life, see, that I weren’t just another bum from the neighborhood.

The fight was about more than winning and losing. It was about earning self-respect and the respect of others. It’s about trying your best and how doing so makes you a winner. Pretty great life lessons, I’d say.  When I shared this with the boys, they said they understood.

However, as the fight began, BR, SJ and Mrs. MMK all said the same thing at various times. “He’s going to win, right. He’s gotta win.”  I didn’t answer other than a vague, “You’ll see.”

When people ask me where I’m from, I give them a two-part answer. I live in Northern, New Jersey. However, I’m from – born and raised – in Philadelphia.

While I have not lived in Philadelphia full time since I was 20 years old, it is very much part of who I am.

Now, it’s not just that I root for the Phillies, Eagles, Sixers, and Flyers. Thought that is part of it. My sports memories – past and present – are tied to the Philadelphia teams. Sports is something that binds people together, whether its celebrating victory or commiserating over defeat (which is something we Philadelphia fans are more used to).

There’s a certain attitude that is distinctly Philadelphian. We (yes, using that intentionally) feel disrespected. You have New York to the North and Washington to the South. These two noteworthy world famous cities get the attention. Philadelphia is left in the middle and is often a vague afterthought. It’s as if the city stopped mattering after revolutionary times.

This feeling of disrespect leads to a chip on the shoulder that manifests itself in interesting ways. Consider this:

A few weeks ago while returning from our trip to Washington, I was bothered by the road signs. We were driving somewhere north of Baltimore, and there were signs on I 95. The sign indicated north to New York. I turned to Mrs. MMK and said, “What about Philadelphia? The sign doesn’t even bother mentioning it, and its north too.” Mrs. MMK just rolled her eyes. She’s heard this attitude before. By the way, later on when we passed a sign that said Philadelphia, I made sure to point it out.

Being from Philadelphia does not just mean belly aching.  I feel a puff of pride when I hear famous people from Philadelphia and make sure to point it out whenever possible. Conversely, when something negative happens in Philadelphia, I feel especially disappointed.

Feeling a sense of place and belonging is important. I want my children to feel connected to the town we live in. We’ve gone to the parade, seen the fireworks show, attended the schools and camps, swam in the town pool, etc. This is their place.

However, Philadelphia will always be meaningful and part of me. It is where I come from and where much of my family, and theirs, still lives. I want the city to have meaning to my children as well. So, I’ve taken them to the Mummers Parade, encouraged them to root for the Philadelphia sports teams, and fed them soft pretzels and water ice, etc.

It’s about more than the culture.

Philadelphia is a town of underdogs seeking respect and working hard to achieve it. Just like Rocky who epitomizes this, I want my children to work hard, do their best, and go the distance.

6 thoughts on “Where Are You From? The Lessons of Rocky and Philadelphia”