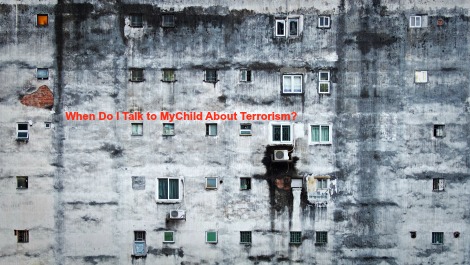 Do you know what a terrorist is?
“Not really.”
“Well, what do you think it is?
“I guess it’s someone who spreads terror.”

Ms. MMK and I are generally not the type to bring up the news to our kids. Why worry and upset them? Why not let them be a kid whose biggest worry is who to play with at recess and who will win at the Kids Choice Awards?

But, they’re getting older and shielding them has grown more challenging. Besides, the pictures and stories and analysis of what occurred in Brussels is all over the television. SJ was bound to hear something, even if it didn’t make sense to him. So, I decided to talk to him.

Talking to your child about terrorism is new to our generation. We’re the first ones who have had had this awful task. Actually, maybe, they’ve been doing it in Israel where they have had to deal with terrorism for multiple generations. This is not a welcomed export.

I brought up the topic as SJ and I were driving home from fencing practice. The horrific details about Brussels were swirling around in my head. I was still trying to come to some measure of understanding for myself, and now, I would have to talk to my 9-year-old who had no clue.

SJ doesn’t know that this latest act of terrorism is surely a tragedy that has changed those impacted directly and indirectly. He also doesn’t know that it feels almost routine or that there is no end in sight. Terrorist attacks leaving score of innocents dead and injured will probably be happening when SJ is at an age where he will be driving his own child back and forth to some after school activity. He’ll have to figure out the best way to explain the craziness that is in this world to his child.

The horrible and bizarre rite of passage – when do I talk to my child about terrorism – will have joined the ranks of talks that one must have with their child. But, there’s no smirks with this one like the sex talk.

Talking to your child about terrorism is about telling him/her the facts while trying not to scare the heck out of them. It’s trying to let them know that evil does exist, and it’s okay to be afraid but not overwhelmed. It’s telling them there’s nothing they can do about it but pray for those impacted and that the evil will ultimately be defeated.

Yes, this is the new era we are in. We have to talk to our children about terrorism.

As I continue the talk with my children, does anyone have any suggestions about how to talk to my child about terrorism?

10 thoughts on “When Do I Talk to My Child About Terrorism?”