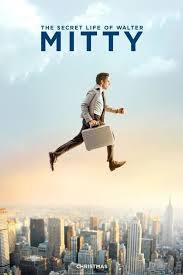 The Secret Life of Walter Mitty starring Ben Stiller debuted in theatres on December 25th. And my wife and I chose to see it for our monthly date.

I watch a movie like an English teacher. Go figure. I look for themes, dialogue, conflict, and lessons learned.  Well, watching Walter Mitty one could learn a number of lessons.

Here are three lessons I learned from watching Walter Mitty.

1. Dream. Walter Mitty daydreams regularly. In fact, he spends a good chunk of the first third of the movie daydreaming.  He rescues people from a burning apartment building, he has witty comebacks for his crush, and he stands up for himself to a rude boss. In other words, in his  daydreams, Walter is heroic, suave, and gutsty. Wouldn’t we all like to have those traits? Walter’s daydreams remind us that dreaming, specifically daydreaming, can be fun. You can put yourself into any situation and always come out on top.  Games of make believe can be a pleasant diversion from reality. At their best, dreams can rescue us from unfulfilling situations – an excellent lesson.

2. Take Action. Walter Mitty clearly enjoys his daydreams and so did the audience. In fact, one of his daydreams left my wife and I laughing for a good two minutes straight. However, for Walter, dreams seem to have replaced action.  He has desires but does not act upon them.  This is readily apparent in the first scene. Walter obsesses over a decision of whether to pursue a woman via online dating.  The woman is a coworker, but he prefers to pursue her electronically, passively, rather than direct contact. Suffice to say, she is the subject of many of Walter’s daydreams. Anyway, there is a glitch and Walter is unable to pursue her via on-line dating. Walter must take action and does indeed speak to his dream girl. This pursuit and action allows him to have real and meaningful experiences. The lesson is clear: the only way to grow and make connections is to participate.

3. Push yourself.  Walter Mitty seems willing to lead a life which he clearly finds unfulfilling. As the movie begins, Walter lives a dull life. One way this is shown is through monochrome colors that pervade Walter’s dress and surroundings.  Walter is unsure of how to make his situation better. He makes tentative awkward attempts to strike up a relationship with his coworker. Walter is unwilling to stand up to his new boss who treats him disrespectfully. Instead, Walter retreats to his daydreams or to his office which is not coincidentally in a dark room seemingly in the basement. Ultimately, Walter’s job is at stake which pushes him to extremes. Walter travels great distances both literally and personally. He doesn’t simply expand his horizons but smashes them.  The lesson comes is we must push ourselves out of our comfort zones if we hope to find true satisfaction in life.

As the movie concludes, Walter is no longer confined to dreams.  He recognizes that the safety of staying within your own confines or daydreams — while pleasant — is ultimately unsatisfying. Walter takes dramatic actions and seems well on his way to living a more contented and meaningful life.

And my wife and I walked out of the theatre, content with our choice of movie.

Image courtesy of: Courtesy of https://www.google.com/search?as_st=y&tbm=isch&as_q=walter+mitty&as_epq=&as_oq=&as_eq=&cr=&as_sitesearch=&safe=images&tbs=sur:f#facrc=0%3Bwalter%20mitty%20poster&imgrc=_

12 thoughts on “Three Lessons I Learned From Walter Mitty”