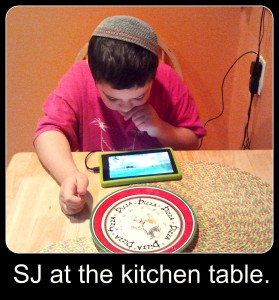 My morning routine has changed dramatically. Where once I rode the bus and subway with strangers (all the gory details here), now I’m at home with strangers.

That’s right I’m home with strangers. I don’t mean my family is strangers. While it’s true it’s been years since I saw my wife and children on a Tuesday morning at 8:00 a.m. in October, the change is not so dramatic that I don’t recognize them.

SJ sits in the same chair every day. He eats the same food (a bagel smeared with both cream cheese and cheese and a blueberry waffle) every day. He is the ultimate creature of habit. These days, I join him at the kitchen table and eat my breakfast.

Picture that. A dad and his son sharing quality time in the morning over the kitchen table. Isn’t that nice? Really, it’s Hallmark worthy.

If only, that was the case. Sigh.

You see SJ and I are joined by a third person. This interloper is a stranger to me. He shouldn’t be as he joins SJ and I nearly every morning.

Want to know his name? He’s Dan. Dan is a kid – probably not old enough to order a beer – is slim, and British.  And your children may know him as well or at least heard his voice as well. You see Dan’s Facebook page has nearly 200, 000 likes. A YouTube video he made gained over 2.2 million views in 5 days.

My children love these types of instructional YouTube videos. Most of the videos are the same. There will be one or more people playing a video game such as Minecraft and they talk about the game while they are playing it. Dan, The Diamond Minecart guy does this solo.

Are your children crazy for Minecraft or other video games? Do your children watch these types of instructional videos? Who joins you for breakfast?

10 thoughts on “Whose The Third Person at the Kitchen Table?”