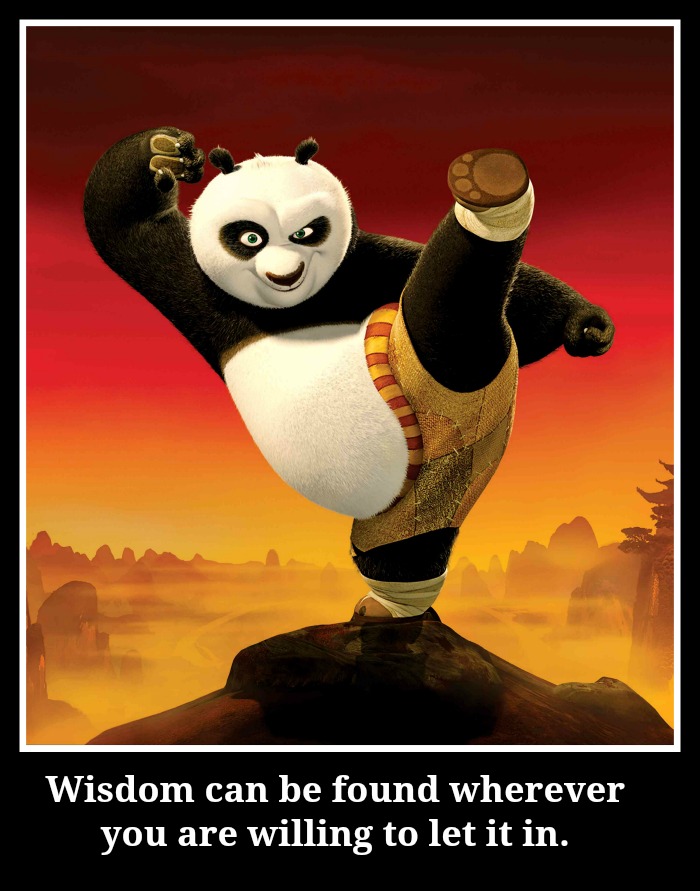 Wisdom can be found wherever you are willing to let it in. Sounds like a fortune cookie, doesn’t it? Anyway, I think I made it up – feel free to quote me or tweet it. Even if I didn’t make it up, it’s something I believe very much. Another time when this credo was proven correct was this past week when I learned the secret is nothing.

My family and I saw previews for the third Kung Fu Panda movie prior to Star Wars: Episode VII – The Force Awakens. It got some laughs. Since then, SJ had wanted to see Kung Fu Panda again, so we took the movie out of the library. SJ asked me to join him since I had never seen the movie. Bonding time – why not?

Here’s a summary for the uninitiated. For those who know the movie, skip to the next paragraph.

A panda, Po, is chosen to be the Dragon Warrior. The Dragon Warrior was to be the ultimate kung fu warrior. The choice was surprising because up to that point, Po had been working in his father’s noodle restaurant. On top of that, he was big, clumsy, and clueless in the ways of kung fu. Those who had been trained and were excellent at kung fu were disappointed at not being chosen and doubtful that Po was the chosen one. There’s a desperate need for the Dragon Warrior because an evil warrior has escaped prison and is headed toward the town looking to take revenge.  Ultimately, Po trains and proves his mettle by defeating the evil warrior and saving the town.

The movie was pleasant enough and had some nice typical child-friendly themes and moments. There is the underdog from humble beginnings who overcomes and ultimately becomes the hero. Before he takes his place as a hero, a problem arises that must be overcome.

Po has earned the title of Dragon Warrior and was given the ancient scroll which he was supposed to understand due to his position. However, the scroll is empty, blank. There was no wisdom to impart. The only thing Po saw was his own reflection. Maybe the whole idea of a warrior was a hoax as well. Po, dejected, turns back and goes to his father. Sensing his son’s mood, Po’s father tells him the secret to his noodles. “The secret is… nothing.” He explains that something becomes special if people truly believe that it is.

From there, Po is revived. He recognizes the message of the scroll about believing in himself, and he becomes the hero that he was destined to be.

Could that be true of everything? Something or someone becomes special only if a person truly believes that it is. The secret is nothing. There is no secret.

We spend our lives looking, chasing, and seeking. For what? For understanding, for knowledge, for joy.

I take so much for granted including the health of my family and myself. Yet, is there anything more precious than that? If I recognized how special each blessing was, how rich, how content, how happy would I be?

The idea of believing in yourself and appreciating your blessings is not a new one. I suspect every faith and belief system includes some sort of call to believe.

However, despite the simplicity, it’s hard to do. I suspect we’d be more successful if we kept in mind that the secret is nothing.

I have a lot to learn. I might need to watch Kung Fu Panda II and III. I need more knowledge.

10 thoughts on “The Secret is Nothing”