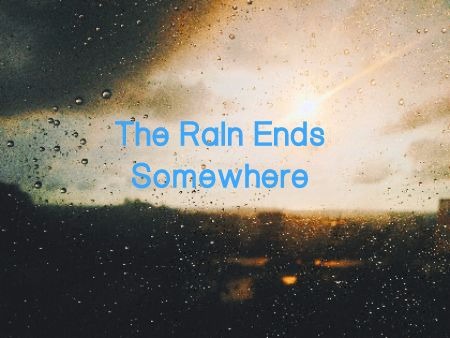 “My teacher told us a story,” BR recalled as we pulled up the house after a day at camp.

“Uh huh,” Mrs. MMK and I nodded from the front seat.

“It was raining in her front yard but not in her back yard.”

“Cool. Well, the rain has to end somewhere, right?” I said.

“It’s just we don’t get to see the rain line very often. When we’re in the middle of it, we don’t rarely see the end. But somewhere is an end.”

It was sunny and then it wasn’t. In the middle of a business call, I had to excuse myself. I ran out to the car and put up the windows and closed the sunroof. The rain was coming down.

By the time I finished my multiple apologies for having run out, the rain was fierce.

A little while later, after I hung up the phone, I grabbed SJ, and we stared out the windows. It was hailing outside. I’ve heard the term, ‘it looks like golf balls are coming out of the sky,’ but had never actually seen it.

Now, I had. And made sure SJ saw it too. We watched in fascination. Leila (the dog) hid under the bed, scared of the noise the hail made as it hit the house.

Later, Mrs. MMK texted BR’s camp. Should we come get him? He had been attending a day camp where they play baseball all day (Yes, he does love it.). Outdoors.

The response came back quickly. Things were fine where they were. They had yet to see any rain.

What? Mrs. MMK and I were in shock. The rain had been coming down where we were – just five or so miles away – for a while.

When we picked BR up from camp, he said, “No, we didn’t have any rain. Except for the rain that just stared falling now.”

Somewhere near, the rain line existed. The rain ended somewhere. There was rain and there was no rain.

I dropped SJ off at camp. As we turned the corner, he said, “You can go now. Love you. Bye.”

The next day when I picked SJ up, we got into an animated conversation about his camp. He was excited about what he was building.

And he reached for my hand to hold it.

So I grabbed on.

Don’t know when the end will come: just that it will sometime.

Photo by Loren Gu on Unsplash

9 thoughts on “The Rain Ends Somewhere”