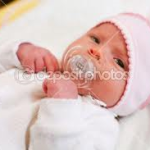 19 thoughts on “The Parent I Was Never Going To Be”