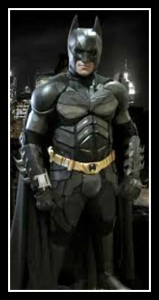 I believe as you get older, your choice of clothes needs to change. In other words, some people should not be wearing certain clothes.

I’m not talking about how some body types don’t support certain types of clothes. I think we have all seen someone in tights, biker shorts, mini skirt, or a half shirt that simply should not be wearing such clothing. I’ll stop there – not looking to paint a picture for you. You’re welcome.

Then you have those types who hang out with their children and feel like they should dress like them. Well, you shouldn’t. Child and adult – different. It’s not cute. It’s weird. Just my opinion – take it for what you wish.

My favorite superhero is Batman. Yes, I know. I am a man in his 40’s, and I have a favorite superhero. Call me immature if you’d like. I don’t care. I’ve been called worse before and am near certain I will be again in the future.

My first experience with Batman was with reruns of the 60’s show. My older brother, NG loved it and didn’t miss an episode. So, the show was on every afternoon in our house. Sometimes we pretended that NG was Batman and I was Robin. He was the older brother after all. 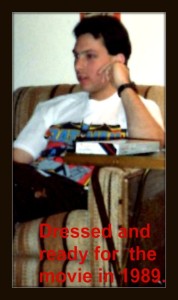 Young MMK (look at all that hair!) in Batman t-shirt the night I went to see the movie.

When the Batman movie with Michael Keaton, Jack Nicholson, and Kim Bassinger came out in 1989, it was a phenomenon. Remember? Well, I was one of those crazies who lined up for tickets. I saw it shortly after it came out. I went to the movie in a Batman tee shirt. I also had the Prince song, Batdance, and the video for it running through my head.

I appreciated Batman’s back story. He has dealt with tragedy. Though he is clearly affected by the tragedy, he is not handicapped by it. Also, Batman could easily live off his family’s wealth and enjoy a comfy life. No, he is doing something for the good of society and does it without seeking glory.

Lastly, Batman is a self-made superhero. He’s not from another planet. He hasn’t been bit by a bug. He wasn’t exposed to radiation. He can’t fly. He can’t become invisible. He can’t breathe underwater. What Batman did do is acquire superior martial arts through tireless effort. He also uses his top notch intelligence to solve crimes and to make the gadgets that he uses (yes, I know in the Christopher Nolan Batman trilogy, he has Morgan Freeman or Lucius Fox to help him with this). Anyway, I respect that Batman made himself into the hero that he is.

So what’s up with all this Batman talk?

I recently was wearing my Batman t-shirt. Ms. MMK got it for me after The Dark Knight Rises came out (loved the movie, the internal conflict, resolution. Yes, I am an English teacher at the movies).  I put the t-shirt on as I was about to go to bed. No, I do not have Batman pajamas. Anyway, I realized that the last few times I wore the t-shirt was in this same scenario. 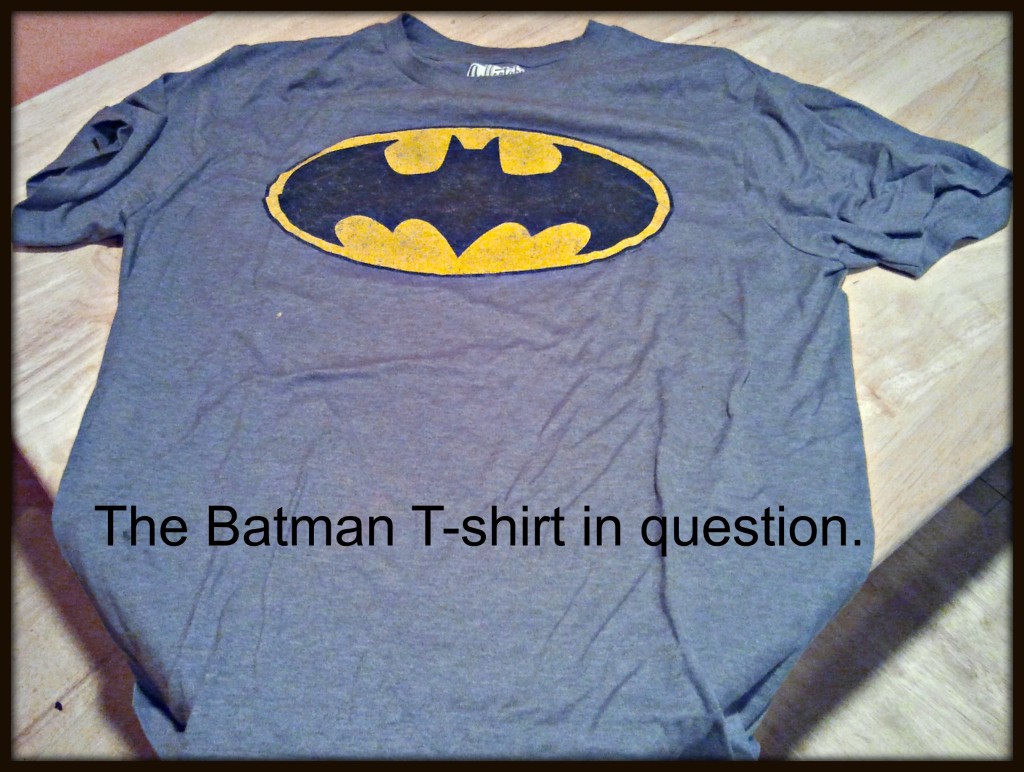 Was I subconsciously telling myself that it is not appropriate for a grown man to wear a Batman t-shirt?  Now, I have been told I am conservative dresser (that would be by Ms. MMK) and while I am certainly not wild, I would disagree with that assessment.

Anyway, is it appropriate for me to wear a Batman t-shirt or any Batman clothing in public? Does a person get to an age where he/she should loose superhero inspired clothing and other such ‘immature’ clothing?  Would you look at me twice if you dropped off your child for a playdate with one of my children and I answered the door in a Batman shirt? What about if I wore it while I was having drinks with friends? How would it look if I wore the t-shirt while my wife and I socialized with another couple?

Is my Batman t-shirt now only suitable for me when I am home or even just for bed? Am I over thinking this one? What do you say? Is it okay to wear my Batman t-shirt out? Are there certain clothes that you would not wear anymore because you don’t think it’s appropriate for you anymore due to your age?