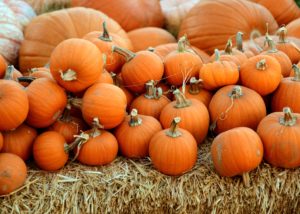 Yup, it was all about the chocolate. That’s what we told ourselves and anyone who asked. And at the time…

But now looking back maybe it was about something more.

“Thanks for coming,” Mrs. MMK says to the trick or treaters who came to the house. There were two of them. Little kids. Dressed up as superheroes.

“You don’t thank them,” I called out, “they’re supposed to thank you.”

Mrs. MMK did not respond. The two trick or treaters were the first of six children who came to our home on Halloween. That’s right – six.  Things got so desperate that Mrs. MMK requested that BR ring the doorbell when he got home (he and I had to run an errand) and say trick or treat.

Meanwhile the bags of candy sat in a bowl waiting to be given away to young children.

But there were no witches, or firemen, Harry Potters or Wonder Woman, scary clowns or dinosaurs. Our house and block stayed quiet. At least Leila, the dog, was happy. She had little barking to do and was free to continue her usual routine of napping.

On Halloween night, the street was lit up. Every house had their porch light on, so trick or treaters could make their way safely to the chocolate laden promise land.

Children were everywhere. The only parents around were of those whose children were too small to go on their own. We knocked on each other’s door having no doubt that our costume would be appreciated, and we would be rewarded.

We dropped SJ off at his friend’s house. He and some others were being driven, by the parent of another friend, to a different neighborhood in town. Apparently, it’s the place to be. It’s a buzz of activity on Halloween night.

Meanwhile, on the streets of the rest of the neighborhoods, the only hint of Halloween is the sporadic decorations that don the homes. Pumpkins, witches, skeletons, and spider webs that look more lonely than scary on a desolate Halloween.

Mrs. MMK and I were talking a couple of months back.

“I think our neighbor directly across the street passed away.”

“What makes you say that?”

“There were a lot of cars at the house for a few days. And lately I’ve noticed they have so many things on trash day. I think they’re emptying out the house.”

“Yeah, I’ve noticed that too.”

We’ve been in our house for ten years. There are eight houses on our block.

The first winter we were here I helped this neighbor with the shoveling. It was a big snow, and I thought I would do them a favor. The husband started giving me directions and didn’t bother with a thank you. It was the last time I helped – let their kids come and do it, I figured.

And that was our only interaction.

I know nothing about them. If the wife was standing in front of me, I would not recognize her. Brown eyes blue eyes, chubby or thin – I have no idea what she looks like.

I miss Halloween. I miss seeing kids in their costumes. I miss giving out candy (I do like the leftovers).

I miss getting to know my neighbors. 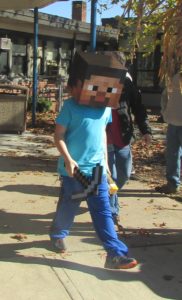 SJ as the Minecraft Guy

Photo by Mark Duffel on Unsplash

2 thoughts on “The Empty Streets of Halloween”