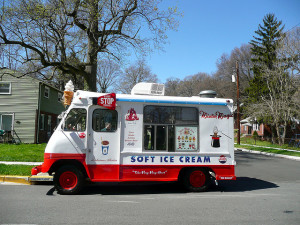 I have seen the power of ice cream. This delicious frozen treat has a powerful sway. In fact ice cream can help every parent-child relationship. Read on and tell me if you disagree.

Let me digress. Over here, my family and I are upon one of the in-between weeks. That’s what I call them at least (https://larrydbernstein.com/in-between-week/). The boys are done with camp. Vacation is next week. Therefore, they are free, and I am the cruise director, Julie McCoy. Well, the male version, and you can call me Larry.
Anyway, during the in-between week, I have tried to do at least one fun thing with the boys a day.  Otherwise, the boys would spend the whole day in front of the television or computer. By the end of such days, they are feisty and punchy. Unlike A Teachable Mom., I feel guilty.
Yesterday’s activity was a hike. Somehow we were blessed with a perfect day yesterday. Actually the weather has been pretty reasonable for a while now since the Hot Hot Post. But yesterday was special. Low 70’s, no humidity, and sun. It was one of those days where you want to take deep breaths and feel the air rattle around in your lungs.
When such days occur, my family and I like to go hiking (Family Hiking Post). It was a short hike but a pleasant one. At the starting/ending point, there is a playground and football field. So, after the hike my boys were hanging out and playing.
There were a couple of other families on the playground.  In addition to SJ, a child was being pushed on the swings, one was going up and down the sliding board, while a third was circling the playground display.  In addition, I saw a few children sitting at picnic tables. All and all, it was as quiet as an occupied playground can be on a beautiful day.
Then, everything changed.
A familiar tune pierced the still air: Ice Cream Man!
The quiet and nearly empty playground was suddenly teeming with children running headlong for the parking lot.
Where did these starving children come from, you may be wondering?
Let me tell you:
Kids burrowed out from under the wood chips
Swung from vines out of trees
Came out of wombs prematurely
Really.
All of a sudden I saw 40 ravenous kids waiting for ice cream where a moment before I saw 8 kids.
—
HOW TO USE ICE CREAM
A TYPICAL SCENE IN THE MMK HOUSEHOLD
I am downstairs. SJ is upstairs watching television. BR is downstairs playing on the computer.
“Boys. It’s time to take your bath.”
Silence.
One minute later – volume turned higher.
“Boys. Bath. Now!”
Two minutes pass and nothing. Ultimately, I end up having to get in the face of both children who look at me as if I am completely out of control. “Why are you yelling?”
Is it me? I’m certain it’s not. Every parent has this same sort of exchange with their children. Right?
Now, people we have a solution. Crank up the ice cream truck music and watch your kids run.
Imagine not having to raise your voice and ask multiple times for something to be done. Imagine having the power of ice cream.
How great would that be?

20 thoughts on “The Call of Ice Cream”