In case you are not familiar with how joy is expressed by seven- and eight-year-old boys, I will inform you.

That’s how I know that SJ’s Angry Birds’ birthday party was an absolute success. After the party was over, my ears were ringing as if a plane was directly overhead.

Worth it? You would know the answer if you had ever experienced the “SJ Thank You Hug.” Picture a young boy of significant size barreling at you until his head hits your chest. All the while, he’s smiling like he just shot the Darth Maul pig out of the air. Yeah, it was worth it.

But you probably want to hear the details.

Since this is the second blog post celebrating the best birthday party ever, you probably know by now that I’m not that sort of mom who takes the time to make fondant angry birds.

Anyway, we followed the pattern of the best minion party ever, since I don’t mess with success. As each boy bounded into our house, he was heralded by shouts of joy from his friends (you see, it was Sunday, and they hadn’t seen each other since Friday….). Upon entering, the boys settled down by playing with SJ’s substantial stash of Angry Bird toys and did puzzles I had torn out of an Angry Bird activity book. “Settled down” may not accurately represent their energy level, but they stayed in one room for 20 minutes or so, and that’s pretty darn settled for this crew! 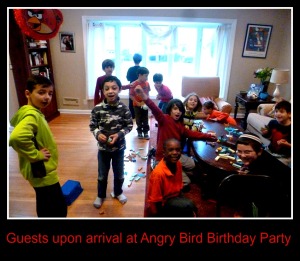 Next, we broke up into two groups and played two Angry Bird games. In case you are not familiar with these flighty fellows, and I was blissfully unaware until a year or so ago, the birds are angry at the pigs because the pigs go after their eggs. Duh!

So our games were two versions of attacking the pigs. In one game a slingshot was used and in the other game, bean bags were used. Ah, the excitement! It didn’t matter that we didn’t keep score, had no clue who ‘won’ and only one kid even achieved the goal in the slingshot game. Why so much fun? Because they’re boys – hallelujah! When they weren’t attacking the pigs, they were play-fighting with each other, bouncing on the trampoline, climbing the couch or the walls, etc. 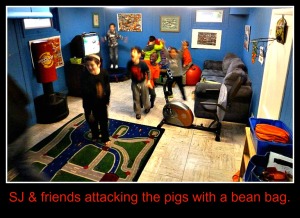 Just when I was about to go deaf, Mr. MMK, (aka party ‘timekeeper’), announced that it was time to watch the DVD. “Angry Birds Toons, Season One,” that is. The boys raced downstairs to our basement and settled down to watch. Again, settled being a relative term…

I went upstairs to get the cake, ice cream, and water ice ready. Ah, the cake. Once again I achieved a kosher Angry Birds sheet cake at minimal cost, thanks to this edible cake topper. Did I mention that SJ does not like cake? He was thrilled with his mango water ice, while his friends demanded the specific angry bird they wanted to devour. 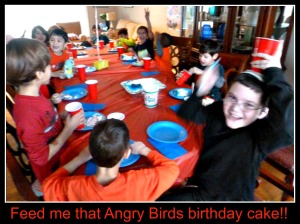 The grand finale was the red Angry Bird piñata. After all 13 boys hit it (twice) and it didn’t break, I removed the piñata from the hook, dropped it in the middle of the boys, and scooted aside. With seconds, each boy was carrying a piece of torn red crepe paper around along with the M&Ms and Twizzlers. 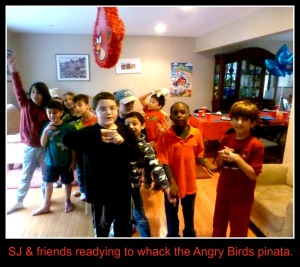 If you’re wondering how we manage the flow of the party, I will tell you that a key aspect of MMK party success is the pre-party run-through. You laugh, but it’s true! It helps on so many levels. This was how we caught onto to the fact that the slingshot was not powerful enough to dethrone the pigs from the Melissa & Doug Jumbo Blocks, but that it worked for the Outdoor Action Game. We also realized that we had a blu ray rather than a DVD in time to avert the “cannot play this disc” crisis. It’s also a good way to help the birthday boy (in this case) adjust his expectations so he doesn’t end the day disappointed because the party didn’t match up to his version of “Best Party Ever.”

Mr. MMK and I ended the day wondering if this was our last major house birthday party. The boys are getting older (sniffle) and next year SJ may be beyond the whacky party games and piñata. Well, maybe not the piñata.

I’ll think about it another time. I’m still basking in the glow of a quiet house with my ears ringing and my chest bruised…. That’s joy, baby!

11 thoughts on “The Best Angry Birds Birthday Party. Ever.”