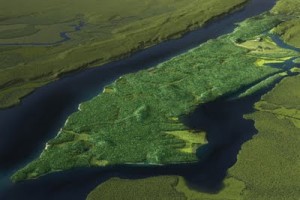 Green Manhattan as the Dutch saw it.

And as the moon rose higher the inessential houses began to melt away until gradually I became aware of the old island here that flowered once for Dutch sailors’ eyes—a fresh, green breast of the new world.  The Great Gatsby F Scott Fitzgerald

The six-lane highway is excessively traveled. The highway is not particularly lengthy. It leads a traveler through small densely populated towns and ends at the river. The tunnel is the only option if a commuter wants to continue his/her travels.

I am a regular on a bus which uses the aforementioned route. The bus I am a passenger on typically gets to the river and tunnel area around 6:25 A.M.

At this time of year, the sun has been up for a few minutes by that hour. In fact, the sun is high enough in the sky so that it is visible above the buildings which are clearly visible across the river.

I look out across that river at the crowded populated land.

The land I refer to is Manhattan, and the tunnel is the Lincoln Tunnel.

I’ve lived in the New York/New Jersey area for close to 20 years now. Yet, I still feel my heart race when I get to Manhattan. I love the energy, the pace, and the possibility.

When I see Manhattan in the early morning light, I feel a sense of wonder. While I know anything can happen on any day, my wonder goes beyond that.

I go through phases where I read 1000’s of pages about a particular place or era and the people that populated that place and time. One such obsession was the Civil War. I read about the major battles –Bull Run, Antietam, Gettysburg, etc.  and of the distinguished people – Lee, Grant, Lincoln – of the time period.

Another such obsession was New York City history. I read about Boss Tweed, Vanderbilt, Horace Greely, The Five Points, Central Park, Times Square, Triangle Factory Fire, Building of the Subway, and other people, places, and historical events that New York is known for.

My new phase is the Revolutionary War and the early history of America – any recommendations? I recently finished Revolutionary Summer and am currently reading Founding Brothers. Both books are by Joseph J. Ellis.

As I go through these periods, I don’t care about specific dates though I do have a good memory for such things. What I do care about are the people that make up history.  I wonder what was going through their minds, how did they view the world, what prompted them to act as they did, and did they know they were creating history.

My goal has been to understand and sense not only what was happening at the time (from multiple angles) but what people were thinking and feeling.

I love the energy and hyperkinetic activity that is present day Manhattan.

Yet, I wonder what Manhattan was like during the Revolutionary War era?

There were no Starbucks or CVS or Duane Reade. One could not tell where he/she was by recognizing the closest skyscraper.

Manhattan was green and mountainous. The terrain was rough. Unconquered and untouched.

If I could,  I would step back in time like Simon Morley in Jack Finney’s Time and Again  (he went to the late 1800’s). However, I would go back further maybe to the 1700’s or when the Dutch first landed. I’d walk that land.

If I look hard enough through the bus window each morning, the buildings fall away and I can almost see that Manhattan of old.

This was a Pizza Hut
Now it’s all covered with daisies
you got it, you got it.

Check out the video: http://www.youtube.com/watch?v=RZuuxcm513c