A few months back, I introduced you to Ronit, the LA lady, who is part of my writer’s group. Ronit, wrote about an airplane trip she took with five children (three of which were her own). The children were very well behaved. Unfortunately, some of the other passengers were not. (https://larrydbernstein.com/no-fear-of-flying/)

Ronit is currently a stay at home mom in New Jersey, who previously toiled as a television producer. She is also now a blogger. After you read this guest post, check out her new blog and welcome her to the blogosphere at http://nitstyl.wordpress.com

Every few weeks or so when I come to the realization that the time has come to clean my room, I glance over in the corner only to find a guitar with a broken string limply hanging from its instrument.  And it is then that I am reminded of the brazen stupidity that brought me to this moment yet again.

A few years ago something possessed me upon discovering some extra cash in the cookie crumb littered depths of my fake Louis V.   Instead of purchasing a pair of really cute and very practical ballet flats, I blew the windfall on the way more impractical purchase of a guitar – a musical instrument I never even played. 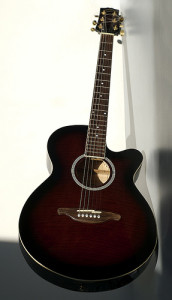 What possessed me to make this purchase in the first place?  It might have been the fantastic notion that I was going to parlay my guitar playing into a satisfying and enriching musical career.  Laugh all you want but it’s my fantasy, and in it, I get to be a rock star.  Besides given the gaping hole in my resume, my prospects for a real job were just as realistic as musical stardom.

I arrived home and shlepped this six-stringed piece of potential firewood, with toddler in tow. It was then that I began to realize just how hard it was going to be to learn how to play this imposing instrument. I refused to attribute this to age.  And here’s why:   You see, I, the multi-tasker-hunter-gatherer have observed many intoxicated individual and/or drug-dependant individuals play this instrument masterfully.  Some of these axe grinders are so skillful that their artistry belies the fact that they can hardly recall their own names.  So, my logic went, if they can do it, then so can I.

But at the time of purchase I also failed to recall that my previous forays into musical mastery did not exactly culminate in my becoming a classically trained…anything.

It began (and ended) with Mrs. Taylor, my aged piano teacher who was so old school… like School of Athens.   In fact, I’m pretty sure that she and Mozart were “friends with benefits.”  Mrs. Taylor was about as inspiring as lint. She had me learn pieces that were as antiquated as she was.   Her philosophy was you cannot play the newer material until you’ve mastered the classics.  Surprisingly my inability to master her assigned pieces didn’t cause her to keel over on our newly painted white upright.

She lasted less than a year at which time she quit on us one day because my mother and I were late to my lesson after driving home from a matinee of Cabaret.  What can I say. The inimitable Joel Grey was the headliner.

After that our piano became nothing more than a place to display our ill-coiffed family photos.

Anyway, I immediately set out on my newest musical endeavor.  I whipped out my guitar picks opened the book that came with it and set out on my musical adventure. And that’s precisely when I realized I should have stuck with the shoes.

As children often like to whine…it’s haaaaard!  And it was.  For me.

I think my brain hit its quota in the “acquiring new skills” category.  I am still trying very hard to convince myself that age was and is not a factor.  After all, I can cook a soup, dress a child and wash the dishes simultaneously.  So why was mastering the finger work of the chords so monumentally exasperating for a woman like me.

Alas, sooner rather than later, the guitar came to be parked in my husband’s closet and left my closet with a shoe vacancy.  My attempts at late in life rock star notoriety seemed wholly misguided and derailed.

And now as I sit back and look around at the clothes and papers strewn around this ill-gotten purchase, I can honestly say I could kick myself with those ballet flats, if only I had had the good sense to have bought them in the first place.