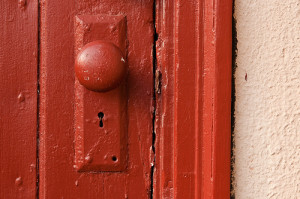 How long will that doorknob stay secured?

I’m eight years old. I pick myself up from the living room floor.

I’ve been looking at the ceiling too many times.

I want to make it to the dining room, but my desire has nothing to do with hunger.

My brothers and I are playing goal line stand. H&M (no, not the store, but my two oldest brothers) stand in the five-foot-wide gap that separates the living room and dining room.  N (my next older brother) and I take turns trying to get past my brothers.

You see, it’s first and goal at the one. And N and I are determined to do our best Wilbert Montgomery impersonation and score a touchdown.

Every once in a while H&M let us score. It is thrilling for me.

Believe it or not, getting thrown down by my older brothers — who at that point were nearly a foot taller than me and 50 pounds heavier — was So Much Fun.

I would have been happy to play that game every day.

My parents did not enjoy it nearly as much as I did. After all, their four sons were playing football in the house. This is not exactly a typical indoor activity. But being the parents of four boys, you know things in the house will get broken at some point.

“The one that goes from the den to the kitchen.”

“How did that happen?”

“He ran up the stairs and grabbed it and it fell right off and now it’s broken.”

“Why was he running?”

“So you chased him?”

“And, he broke the door handle.”

And then I went back to reading the paper.

You see on the richter scale of house destruction, a broken door knob is near the bottom. It’s just below knocking over the lamp and breaking a light bulb and just above chipped paint.

In other words, a broken doorknob is a minor inconvenience and the price of doing business.

What business you may be wondering? Well, it’s the business of raising boys.

If I were to get upset at every nick, scratch, and mark, my boys made there would not be enough blood pressure in the world to keep my heart from bursting through my chest. By the way, did you notice that two words for minor destruction also are boy’s names?  You’ll be happy to know that my blood pressure is low.

While I did talk to SJ about the doorknob when I got home, I have no grand expectations that things will change. Instead, I accept the boys being boys – rough-housing, destruction, and rowdiness. Either that or get rid of my boys.

Which would you choose?