Things to do.  Limited energy.  You know what I mean. Anyway, the result – my children watch way too much television. The television is convenient.  The children are quiet.  I know, I know they are not chiseling out my bust for the parent hall of fame.

Two weeks ago I mentioned to you about my son’s obsession with Mickey Mouse (Mickey-mouse-questions-and-thoughts) and how it has filtered down to me. I still have some unanswered questions on that front, but I am moving on.  Today, I come to you to praise one of the regulars of my children’s television watching. SpongeBob. 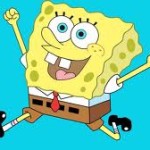 That’s right I like SpongeBob. Not only do I like him, I think he is a good role model. Let me run down a list of his positive traits.

WORK ETHIC: – Who wouldn’t want their child to have a work ethic similar to Sponge Bob’s? He is punctual. Once SpongeBob arrived late at work. He felt so bad that he started sleeping at The Krusty Krab.  On top of that, he is ambitious. When Mr. Krabs was going to open up a new store, SpongeBob was eager for the promotion. When Squidward got the job, SpongeBob was crushed.

FRIENDLY: SpongeBob is even nice to Squidward despite the fact that this friendship is rarely returned. There was an episode where Squidward was being bullied. SpongeBob insisted Sandy Cheeks teach Squidward karate. Of course, SpongeBob is always there for Patrick. In one episode, Patrick’s parents come for a visit.  Patrick is worried because his parents think he is dumb. So, SpongeBob pretends to be a moron to make Patrick look good.

LOYAL: SpongeBob will do just about anything for Mr. Krabs. In one episode, Pearl, Mr. Krab’s teenage daughter, insists on having a sleepover. Mr. Krabs vacates the house, but he is worried about leaving her alone. So, Mr. Krabs asks SpongeBob to check on the sleepover. SpongeBob does so and in many different guises – including as the pizza delivery guy.

PERSISTENCE: SpongeBob wants to learn how to drive a boat. Unfortunately, he has repeatedly failed his driver’s exam. Instead of giving up, he continues to take driver’s education classes.

RESPECT FOR TEACHERS: (You knew I had to throw this one in there.) Ms. Puff is SpongeBob’s driver’s education teacher. One day Ms. Puff was absent from class and SpongeBob was so disappointed. In addition, whenever Ms. Puff needs something, SpongeBob is happy to oblige.

HUMILITY: SpongeBob was working as a stand-up comedian and bombing. So, he started making fun of squirrels and the crowd loved it. Well, Sandy Cheeks, SpongeBob’s squirrel friend did not like it as others in Bikini Bottom started looking at her differently. So, SpongeBob fights his desire for popularity and instead starts making fun of himself (and everyone else).

Yes, I know SpongeBob can be an idiot and has an annoying laugh.  However, honestly now, tell me aren’t these qualities you respect in others and want for your children? I know I would like to see my children exhibit these qualities. So, though I feel guilty for being busy and turning the television into a babysitter, I feel a little less bad when my children are watching SpongeBob – a real role model.

P.S. You should know that 99% of this was written based on my viewing of the show and 1% was researched to refresh my memory. I tell you this so you should judge me. Go ahead! I can take it.