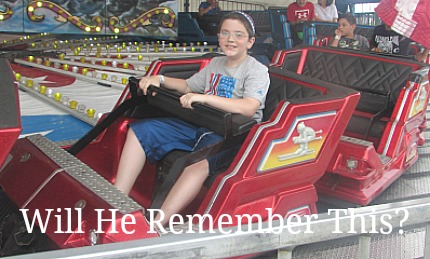 I’m obsessed with memory.  When does it start? What makes a memory? What impact does it have?

Recently, my brother told me that he read that the time people remember best is around 9-11 (can’t remember exact number he said – no pun intended). Anyway, according to what he read, there is more room for memory in the mind then – less clogged. In addition, it is around that age you are becoming more cognizant.

SJ is nine and will be ten in November. So, this is right in his wheelhouse. This is his time to soak up memories like a sponge. These are the memories he will look back upon as he ages.

In my logic – maybe you agree, maybe you don’t – that means it’s especially important that I do what I can to help him create good memories. I want him to look back fondly on his childhood. I want it to serve as fodder for stories, strength in times of uncertainty, joy inducing in times of challenge.

Yet, SJ seems to remember nothing. He does very well in school (Mrs. MMK and I are proud and thankful for that) and can tell you anything you want about Star Wars, Angry Bird Epic, I Survive book series and other such topics.

But the personal memories – forget it. Well, he does. He can’t even remember what we’re having for dinner even though he asked me in the morning.

Such memories are not particularly important though it’s annoying to have to answer the same questions repeatedly.  Side note: He better return the favor if I lose my memory when I get old!

It’s the bigger memories – the ones that are special – that he also does not seem to remember that I wish he would. Last year, I shared about going into his room after I thought he was asleep in order to say happy birthday.  When he was actually awake, we had a moment together that was special to me.

And I thought it was to him too. Newsflash – I asked him, and he did not completely recall. I think he didn’t recall at all but pretended to remember a little because he could see it would hurt my feelings. While I’m sad he doesn’t remember, I do appreciate his sensitivity.

Well, the fact is I don’t know what he will remember, and he doesn’t either. Memory is often fragmented. We remember moments and sound bites – we were driving somewhere and you did … we were at that park and then… I was playing one night and it was…

Even if we don’t remember all the details – and no one does – we remember snatches of time. We remember feelings that we were made to feel.

And SJ is no different.

I remember a conversation I had with someone about religion. They said something like, “I don’t know for sure there is a G-d. I believe it, but I don’t know. Let’s just say, for arguments sake that there is. If I’m doing right by what he commands, then at the end I’ll be rewarded. And if not, well, I’m enjoying my life doing as I’m doing anyway.”

Even if SJ’s memories of childhood are limited, I’m enjoying spending it with him. That moment when I said happy birthday to him has and will stay with me. It meant a lot to me. I’m enjoying his childhood, and that’s important too. That joy is surely getting passed on in some way – even if it’s not always clear.

So, if me creating moments for SJ is selfish – so, be it. Ultimately, he will have some memories.  And some day when he is an adult, and we reminisce there will be some memories that we share. As for those other memories, we’ll share them too and fill in each other’s memory.