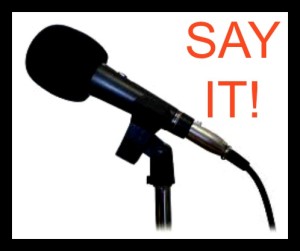 Sam Kinison yelled these words in the Rodney Dangerfield movie, ‘Back to School.’

For the uninitiated, here’s a quick summary of the movie. Dangerfield is wealthy but does not have a formal education. To motivate his son who is not particularly interested in school, Dangerfield enrolls in college. Kinison has a brief role as an out of control history professor.

Anyway, I’ve quoted this line and scene before when trying to encouraging students to participate. The way I deliver this message is not nearly as dramatic as Kinison who is yelling in Dangerfield’s face when he says, “say it.” The point is the same: stop hesitating, say what you have to say and do so with conviction. 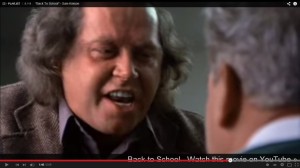 Movie scene from Back to School

Well, the other night I started calling “say it,” to my boys.  Afterwards, we watched the clip from the movie and the boys were laughing. Later that night, I heard them yelling it out and then laughing some more.

We can add this clip to our repertoire. You see I’ve been showing my boys clips from some of my favorite comedy movies.

The movies and the clips that are part of that repertoire are as follows:

‘Airplane’ –Get a Hold of Yourself  A plane is experiencing severe issues including turbulence. A female passenger loses it. The stewardess leads a parade of people who line up to calm her down. 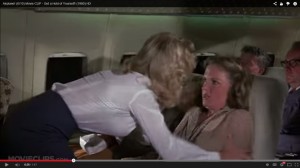 Scene from the movie Airplane

‘Planes Trains and Automobiles’ –  Those Aren’t Pillows Steve Martin and John Candy are forced to sleep in the same bed and find themselves in an uncompromising position come morning time.

Scene from the movie Planes Trains and Automobiles

‘Fast Times at Ridgemont High’ – Sean Penn as Spicoli orders a pizza while in history class with a strict teacher and utters one of the best movie lines ever, “If I’m here and you’re here, doesn’t that make it our time.”

Earlier this week, I had a chance to “say it.” The guys over at the Life of Dad interviewed me for the after show. The Life of Dad  is a Social Network for Dads which features thousands of fatherhood videos, blogs, podcasts and more. Each week they have the Life of Dad   after show where they interview a dad blogger. This week I was that blogger.

You can hear my “say it” about education, Disney World, and other topics here. Check it out and enjoy.

What movies and or scenes have you shared with your children?

*Please note all clips and links are from Youtube.