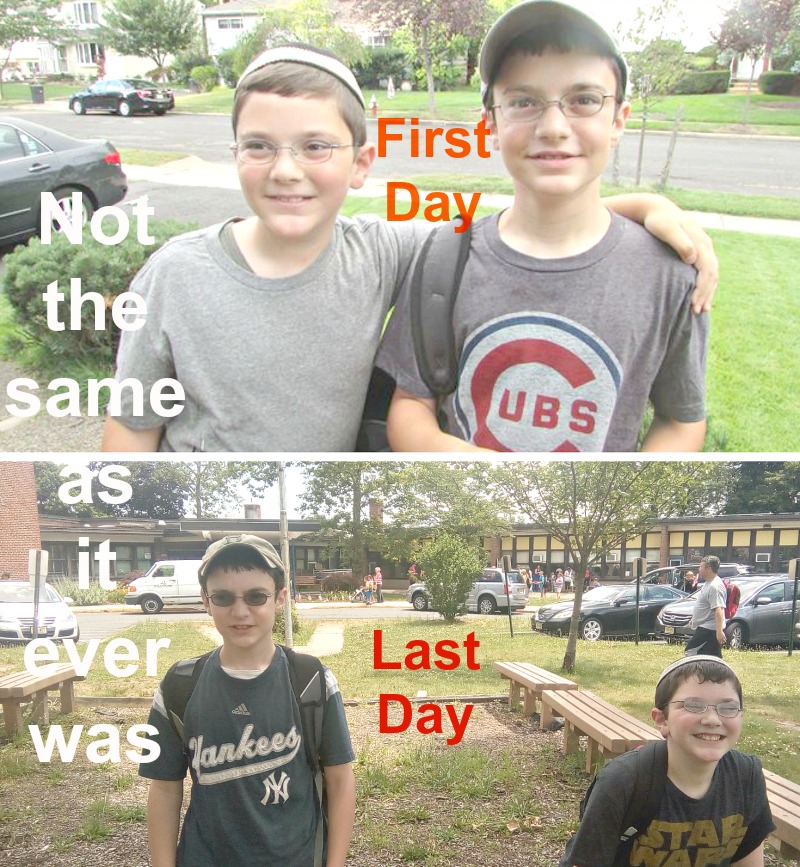 I hear the lyrics to the Talking Heads song, ‘Once in a Lifetime,’ as I pull up to BR and SJ’s schools. Upon hearing the song, my first though is of David Byrne’s herky jerky dancing and karate chopping movements along his arm in the song’s video.

My next thought is, no it isn’t. Sames as it ever was, that is.

Today is the last day of 4th and 7th grade for SJ and BR respectively. Neither school year ends in graduation or other such dramatic change. Yet, next year won’t be the same as this year just as last year wasn’t the same. Nothing stays the same.

I walk up to the school early today. Not planned – circumstance. I sit down on the bench waiting for the bell to ring and bring the school yard alive with the voices of children. My phone is down, and I look around trying to sense the feeling in the air. Parents walk up in shorts and flip flops. Phones get whipped out and hushed conversation are had. A stillness hangs in the air. It’s a bright sunny day.

And then the school bell rings. I’m waiting for pandemonium. Shouts of joy. Paper to go flying every which way. Alice Cooper to start singing School’s out for Summer.

But there’s nothing. Kids are smiling. There’s a bit of lingering. Some kids are running around. One fourth grader even utters, ‘school’s out for summer.’

Yet, dismissal goes off like a whimper and not a bang. It’s not all that different from previous days.

Maybe it is, same as it ever was.

No, time marches on.

Time and change are constants. At times, the changes might seem slight and may even be imperceptible, but step back and look carefully. Things and people have changed. They always do.

Nothing stays the same as it ever was.

2 thoughts on “Same as it Ever Was: Thoughts on The Final School Day of the Year”