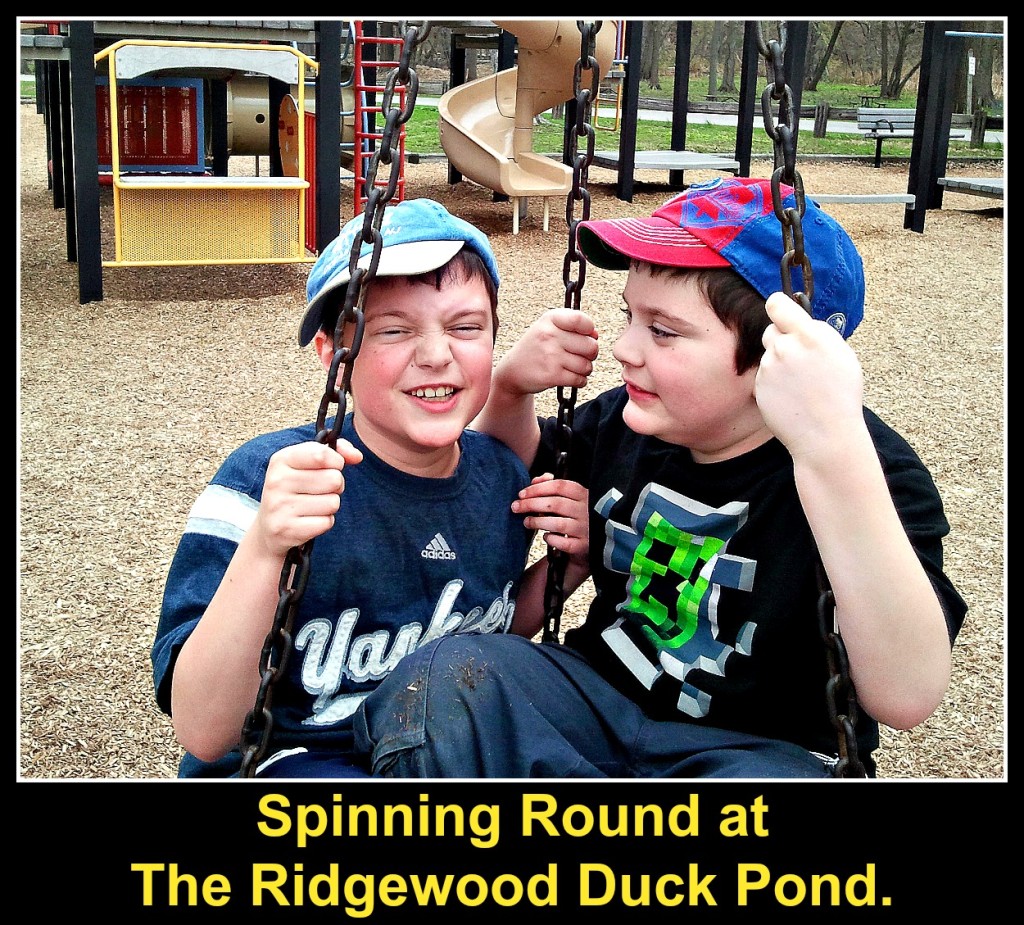 I discovered our park shortly after we moved into the area. It was a July day, and I was pulling a Columbus – driving around doing some exploring.  I wanted to get the lay of the land. Plus an eight-month old SJ wouldn’t sleep, and I figured a car ride would do the trick. That was the day I found the Ridgewood Duck Pond.

We’ve been there so many times over the years.

Now, every family’s park needs to have a good playground and the Ridgewood Duck Pond fits the bill. It has benches – a must from all parents’ perspective. It also has wood chips on the surface. So that inevitable fall doesn’t stop the fun. It’s also shaded for a chunk of the day. Cool, just cool. Finally, the play area has fun things for children to climb, switch, hop, and spin on.

However, it’s not the playground that makes the Ridgewood-Duck-Pond so awesome. It’s not even the other amenities the park offers such as tennis courts, picnicking pavilion, or fishing that makes it our family park.

The Ridgewood Duck Pond is part of Saddle River County Park which is “a 577-acre linear park that meanders with the Saddle River and its tributary brooks. It consists of five park areas that are linked by a multi-use path, including circular paths around some ponds.” It also notes that there bike and pedestrian path that is approximately six miles in length and goes through six towns in Bergen County and features a scenic waterfall.

Between the playground and the walking/hiking (we love to hike), my family and I have had so many fun experiences at the park.

SJ’s pudgy legs dangled in the air as the swing went back and forth. He’d squeal with delight and say “higher, higher.” I still remember the day he had to move to the ‘big boy’ swings. He was sad. I was sadder.

BR was pedaling along the trail on his big wheel. He got ahead of me and kept going. By the time I caught up to him and turned him around, we had traveled over 5 miles and through three towns.  I don’t know which one of use slept better that night.

School was starting the next day, and we needed to enjoy the last moments of summer vacation. BR and SJ went ahead while Ms. MMK and I strolled behind. Suddenly, BR decided to pick up the pace. “As long as he is within our sights,” I told Ms. MMK, “he’s fine.” Well, 45 minutes later we finally found him more than 2 miles ahead talking to a stranger. Scariest. Parenting. Moment. Ever.

There’s a bridge that goes over Saddle River and connects to a residential area. Over the years, the boys and I tried many times to make a dam in the middle of the river. We’d gather sticks from the park area and drop them off the bridge. Sometimes, we’d just chuck the sticks as far as we could.

And we wander. We walk along the paths with no destination. We watch the ducks. We enjoy the trees, leaves, and animal life.

We do it all at the Ridgewood Duck Pond. It’s our family’s park.

12 thoughts on “Ridgewood Duck Pond: Every Family Needs a Park”