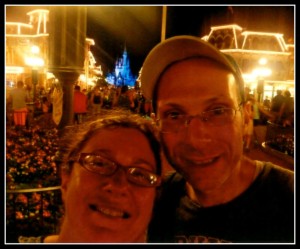 Ms. MMK and I during happy times.

So, does an argument truly exist if it is silent and neither side acknowledges it?

I know of what I speak. Ms. MMK and I have had a number of silent arguments over the years.  By the way, we have had plenty of the loud and ugly arguments too. No need to talk about those. Unpleasant memories that they are.

Anyway, Ms. MMK and I are nearing the end of our most recent silent argument. The issue: at what temperature to set the refrigerator.

I know it sounds like a ridiculous thing to argue about. Does it really freaken matter? Well, it’s far from Earth shattering, (If you want to read about Baltimore, Iran, or Bruce Jenner, you’ve come to the wrong place) but it can be teeth chattering.

Ms. MMK likes the refrigerator temperature to be set low. She likes her food and drink very cold.

The refrigerator is so cold I have to take the water out 5 minutes before I want to drink it. My hand recoils when I touch the skin of an orange as I pull it out of the fruit bin. The apple sauce has ice formations at the bottom of the jar.

I, on the other hand, prefer the refrigerator temperature to be set at a more moderate rate. Not only does the food and beverage keep at tasty ready to eat/drink level, but it also happens to eco-friendly (Go Earth Day! Yeah, I know I’m a little late but isn’t the environment worth saving every day?).

By the way, this argument did not start off as a silent argument. I tried reasoning with Ms. MMK. I told her about the horrors mentioned above. My teeth literally started chattering when I took a drink of water. Somehow, I got no empathy. Cold woman (pun intended).

Ms. MMK countered that the milk and the other food was going bad at the temperature I set the refrigerator. Yes, a couple of things went bad, but that was just bad luck.  I blame the stores.

Well, I’m sure you can see that I was right. Somehow Ms. MMK did not.

So, what has happened since? The temperature settings of the refrigerator have fluctuated more than the body a belly dancer.

Ms. MMK has turned the refrigerator to what she feels is the proper temperature setting on the sly, and I have done the same. We don’t bother trying to reason with each other about this change. There’s no point. 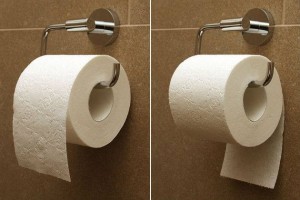 Toilet Paper: The source of a silent argument

For Carl of bigcheesedad and his wife, it’s about Coke. His wife habitually leaves her half-full cans all over the house. He asked her to put them in the sink or in the recycling which is next to the sink. But, she can’t be bothered. Carl wants to leave them sitting around but is worried that their 22 month old might get her hands on it. Carl is clearly not going to win this silent argument.

For Dustin of daddyneedsanap and his wife, it’s about Netflix. His wife falls asleep when they watch movies. He can either continue watching the movie or save it till the next night when she will probably fall asleep again. So, Dustin has movies piling up that he wants to watch.  If he watches and returns the movies without his wife seeing them, she gets upset. So, he can either watch them on the sly or wait for his wife. He got the best of this argument because, “She didn’t even remember what movie it was she originally was so pissed that I returned before she finished it.”

Roberto of rantomthoughts and his wife are having a classical silent argument. He likes to bump music while doing things chores around the house. His wife, on the other hand, likes the music to be simply background noise. “So there are times when we each pass through the room adjusting the volume, but never acknowledging that it’s changing.”

David of dadsroundtable and his wife are having a silent argument that I suffer through as well as well. His wife does not shut things off – television, lights, etc. She figures she is coming back, so what’s the point. So, David shuts things off. He says, “I can track her movements throughout the house by what she leaves on.”

Yes, every couple has their silent arguments.

Tell me readers, what silent arguments have you been involved in?