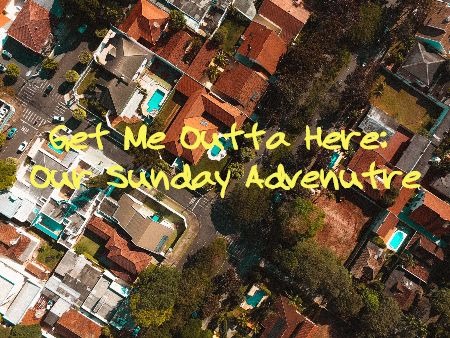 “So, who wants to do something fun?”

“We’ve been in the house all day, and it’s beautiful outside. We have to get out. Don’t you wanna get outta here?”

Content to lounge around staring at an electronic, neither BR nor SJ was interested in leaving the homestead. A youtube induced slumber had descended upon them again had entranced them again. Their eyes glazed over as another Sunday was slipping away.

Mrs. MMK was in agreement.

She did a quick search of things to do, and we found a few options. I said no to a hike. Love hiking but that’s all we ever seem to do. The boys ixnayed everything else – they’re so darn adventurous, I must say. Finally, Mrs. MMK and I settled on a car show.

Neither of us is interested in cars. And the boys aren’t either. So, the plan was far from ideal, but at least, we would be getting out of the house. Bonus points: we could take the dog.

As we strapped in our seatbelts, the boy’s question of where are we going had to be answered.

“What? Why are we going there? What do you do at a car show? That’s boring. I don’t care about cars.”

We’ll go to Skyzone. It’s a trampoline place. The boys can get out their energy which they didn’t seem to possess anyway. Ten and thirteen going on 90. Oy, I’m exhausted.

Anyway, they agreed, but now had to go back in the house and get socks.

Tick, tock. No rush. Really. I’m reading a book on mindfulness. I worked on my breathing.

This ride was going to be different. Any car ride, 3 minutes or 3 hours, usually means BR listening to music, and SJ staring at his Kindle.

Uh-uh. Not this time.

No electronics. I insist!  Even books were not allowed, to SJ’s dismay.

We are going old school on the way to our destination. By the way, it was all of twenty minutes away. We could it. I was sure of it.

We were going to talk or silently stare off or fall asleep.  Grumble, grumble.

We have the car version and periodically play it on car trips. Mrs. MMK and I are the biggest fans and the boys sometimes get into it.

We spent the majority of the trip calling out the things we spotted. It was fun and much easier than when on the highway. SJ got a little cranky at one point and tried to pull out a book – the fiend!

Well, we got to Skyzone, registered the boys, and off they went to jump. Mrs. MMK and I took turns watching them while the other hung out with the dog.

After 20 minutes of jumping, the boys were exhausted.  Yes, they need to get out more.

Glad we only got the half hour package.

Next was a stop at Rita’s Ice. As long as a trip ends at Rita’s, my children will do nearly anything.

Our Sunday adventure was neither particularly adventurous nor long. But we did enjoy it. And we got to see the big ball in the sky: the sun.

Photo by João Silas on Unsplash

4 thoughts on “Our Version of Sunday Adventure”