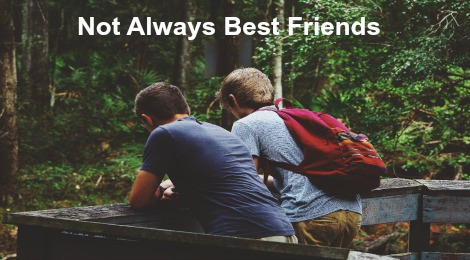 BR met IL in kindergarten. Before September was over, I was hearing about IL regularly. While walking one morning, BR told me, “IL is the best friend a guy could have.”

The first play date BR had outside of our neighborhood was with IL. I was nervous when I left him there. BR was excited. When I picked him up two hours later, BR was still smiling.

The boys seemed to understand and appreciate each other in a way that others did not. They were their own group and in their own world.

It’s been two years since BR and IL have been together in the same school. When Mrs. MMK and I pulled BR from school, we made sure to tell him that we would schedule play dates with IL regularly. And they have gotten together regularly since then. Of course, life is busy, and the definition of regularity continues to lengthen.

These days, when IL comes to our house, he heads right down to the playroom where BR is waiting for him. Other than breaks for cookies, juice, and pretzels, I see or hear little of him while he is here. The boys are content with each other’s company.

Do you remember who your best friend was when you were twelve? Do you see each other? Are you Facebook friends?

Twelve is a funny age. Children are maturing. The boys are talking about girls, and the words yuck or stupid are not part of the conversation. Boys also talk about baseball, Lego, and Minecraft.

While that’s fine, what impact does it have on best friend status when you are twelve and in different middle schools?

After a recent play date at our house, I drove IL home. He seems different. It’s easier to see changes in those you see less frequently. I know BR is growing up too and changing. But the changes seem gradual.

As I drove IL home (BR and SJ were in the back seat), I was wondering about the friendship between he and BR. Where once they seemed cut from the same cloth, the differences now are more apparent.

Just as BR has other best friends now, I’m sure IL does too. Maybe, the two of them will continue to stay close (and I hope they do), but they may not always be best friends.

It’s hard to see the future of a twelve-year-old.The changes start happening, and they will only become more pronounced.

BR and IL remain friends. It’s not the friendship that they had when they were six.It can’t be. Maybe those changes will make the friendship stronger and maybe not. Either way, it will be different.

Pic is courtesy of unsplash.

8 thoughts on “Not Always Best Friends: Twelve is a Funny Age”