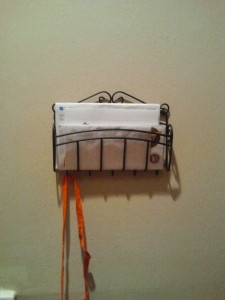 I remember a book that I read in in kindergarten. Or first grade. But that’s not important.

The book was entitled The Man Who Didn’t Wash His Dishes and it’s by Phyllis Krasilovsky.

Full disclosure. I didn’t remember the title or author but found it on Amazon (Book Link). However, I do remember the basic plot.

This process of avoiding the dishes goes on for a few days. Ultimately, the man has no dishes left. He starts to use other items in his house as dishes. The dirty dishes pile up everywhere until his house gets overrun with dishes.

While I may have some of the details off (I forgot the ending till I saw the link on Amazon) this story had an impact me on me.

Some probably took away the helpful lesson of doing a task promptly rather than letting it grow and become overwhelming.  They are the types who do the dishes the second the meal is over.

That’s not me. However, I much prefer an empty sink.

Anyway, the lesson I took from the book is to be a minimalist.

I don’t want my house overrun by stuff.

This seems to go against the grain in the world today.

Now, I would not mind a bigger house. I would love to have more space.

But let’s be honest here. Why do most people want more space?

So they can have room for more stuff.

Am I the only one who is hearing George Carlin’s classic bit on stuff?  Hilarious. Check out Carlin here on Youtube. CarlinonStuff

Now you may recall from a previous post I wrote about the bench (https://larrydbernstein.com/to-the-bench/). Ms. MMK thought it was necessary to hold stuff. Despite my protests, it’s now is our foyer.

And guess what? It holds stuff. But somehow we don’t have more room. Though we probably have more stuff.

This brings me to the picture at the top of this post. Well, see she’s at it again.

Ms. MMK felt we needed this item to hold mail and therefore assist in organization. You may think this is clever.

Shortly we after moved in, she bought these wicker baskets. They were supposed to be for mail, among other things. Then, she bought a stand-up metal tray for mail.

And now we have this mail slot.

Okay, I don’t go through my mail as quickly as I should. It sits around for a little while and then I go through it in one fell swoop.

Anyway, I take my mail and put in my dresser drawer.

I don’t need a wicker basket.

And I don’t need a mail slot.

Am I the only one who thinks my wife’s purchase is crazy?

I ranted and raved.

And that night she put it up.

I need to buy some pants. That’s the stuff I need.