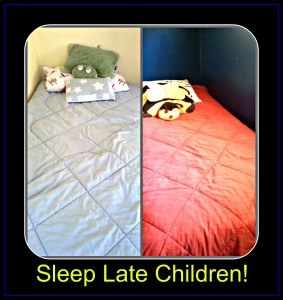 Let me get to the point. I am now two weeks or so into my summer break. Summer break is one of the greatest perks of being in the education field. Plenty of school personnel would tell you they could not survive without the summer break. It is a time to recoup, refresh, and regroup. It’s a beautiful thing.

Anyway, I look forward to sleeping later in the summer. Now, I’m not talking about 11:00 a.m. I’m not a teenager who has few to none responsibilities.  Truth be told, I rarely slept to 11:00 a.m. when I was a teenager. And those times I did, I felt like the day had been wasted.

Back to my children.  There has not been more than three days in the past six months when both of them slept past 7:00. Please note when my children wake up, they are loud. So normally once the first of my children awakens, the rest of us are up shortly thereafter. Well, I’m not here to complain about my children not sleeping. Okay, I am, but not exactly.  Lack of sleep is a topic you can see on every other parent blog.

I’m different these days. I used to grumble, mutter underneath my breath, and even question, why I bothered having children.  When my children would wake me up, I’d put the pillow over my head.  I’d go underneath a blanket. I’d cover my ears and ignore. Yes, I tried every method and often more than one to sleep through the morning noises my children would make. Damn, I wanted that sleep.

And occasionally it would work. But it was rare. I ultimately end up shaking my head, sighing deeply and mumbling under my breath about how my children were trying to kill me. Yup, I was a ray of sunshine.

This summer, I’ve thrown in the towel. What’s the point of even trying to sleep late? Again, I don’t mean teenager late. I can’t even imagine sleeping till 11 A.M. I simply mean 7:00. A.M.

On top of that, I’ve been setting my alarm for 6:10. Now, at least one of my children is up before that time, but I’m going to ignore that here. The point is the children have changed me. I neither sleep late nor even attempt to sleep late.

I try to see the positive of this profound difference. I am not focusing on my not being able to sleep late anymore. It’s that I get to sleep a half hour later than during the school year. That’s a good thing. Plus, when I wake up now it’s light out unlike the Fall and Winter months when it is dark and depressing. Lastly, when I leave the house to go a morning service at the Synagogue, I get to see my children.

I do love those children even though they have changed me.

10 thoughts on “My Children Have Changed Me”