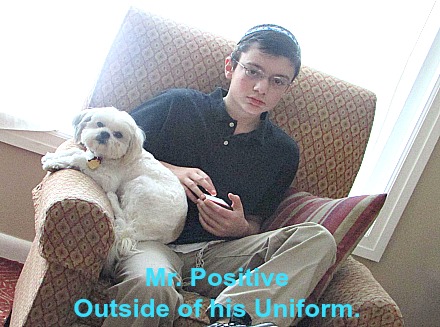 An old friend has resurfaced. Or so it seems. A while back I wrote how BR seemed to have morphed into a Mr. Positive like Tony Robbins.

In that previous post, I noted that, “BR is regularly giving me high fives for effort, calling out such encouragements as “nice try” or “nice one.” He has offered comfort by telling me, “at least you tried.”

Now all this was occurring when he was nine-years-old. Today, at thirteen, he is a full blown teen. This age is known for a lot of things – moodiness, selfishness, and smart aleckness.

No, I am not saying every thirteen year old displays all these characteristics all the time. In my exposure to children at that age, I have also witnessed many positive behaviors and actions.

Anyway, BR seems to be returning to his Tony Robbins days. But unlike previously, now I see a pattern.

The positive attitude etc. comes out while playing baseball especially during games.  Yup Mr. Positive comes out on the baseball field.

Now, many children/players become intense when playing as they are fired up by their competitive spirits. While there are a few people who want to win as much as BR does (he must get that from Mrs. MMK), he also remembers to be a good teammate.

My co-coach and I have set some rules for our team. Our first goal is that team members should support and encourage each other. We very much want to see the team cheer for each other and build a sense of camaraderie.

Well, during game one of our season, there was one player who regularly cheered for his teammates. Guess who it was? Yup, BR was cheering and trying to get the other players going too.

BR went a step further. When the game was over, he (without asking the other coach or myself) gave the game ball to one of the players on the team who he felt had the best game. Incredibly nice and positive gesture. I’m proud of him for thinking like this. The fact that we are limited on softballs and now we have one less annoys me a bit, but that’s another story.

I’ve been trying to push myself to be a more positive person. I do believe being a half-glass full sort of person does indeed matter.

One thing that convinced of this is Dr. Martin Seligman’s 1990 book, Learned Optimism. Seligman says that, “Optimists are higher achievers and have better overall health.” On the other hand, “pessimists are more likely to give up in the face of adversity or to suffer from depression.” Seligman believes pessimists can learn to be optimists.

Another recent piece that talks focuses on the same topic can be found at Health Ambition. The post notes a number of health benefits to positive thinking and how negativity increases pain. And as noted on the blog Self-Development Secrets, I need to stay positive even if those around me are not.

So, I hope BR, aka Mr. Positive can take that good attitude from the baseball field and translate it to the rest of his life. As he does so, he can be my coach! I want to be more positive too.

6 thoughts on “Mr. Positive on the Baseball Field”