Today I have as my guest Melissa from Motherhood is an Art Melissa is the mom to two school age children and one toddler. She is from Wisconsin and believes the key to motherhood is creativity and lots of humor!

I was extremely happy when Larry asked me to be a guest blogger on his website. I have known Larry since he became one of my first followers on my blog Motherhood is an Art. He has always been a very encouraging fellow blogger. However, I must admit I always cringe when I know that he has read a post of mine knowing that he is an English teacher. I am well aware that my grammar and punctuation ain’t no good (okay, the “ain’t” part is a joke but it’s true that many grammar and punctuation principles elude me). So I can only imagine that he is mentally red circling most of my stories!

It’s also notable that Larry is probably my only male follower. I realize I kind of slotted out this demographic when I named my blog Motherhood is an Art. It certainly doesn’t scream, “Come read this you testosterone-laden males.” In retrospect, I probably should have named it something to do with “parenting,” but in all honesty I do think there are distinct differences between Motherhood and Fatherhood and “parenting” generalizes the two. My voice is about being a Mother. I know about this particular side. I have been doing this mothering thing for almost 8 years to a daughter and two sons.

Let me break down for you how similar situations are dealt with by my husband and me in our household to further illustrate my claims that mothers and fathers are different creatures.

Beans Up the Nose:

My approach to this is to gently tell my child that you do not put beans in your nose. I explain that by putting a bean in your nose could cause it to get stuck in there and then it would proceed to sprout and create a twisty vine that grows throughout your sinus cavity.

My middle son and I used to play with his plastic dinosaurs together. I would hand him one and tell him it was the baby dinosaur.  I would then grab one and say it was the Mama dinosaur. Right away he would start roaring and make lunges to eat Mama dinosaur’s feet off. I would tell him that baby dinosaur needed to apologize for trying to eat feet and that it was time for baby dinosaur to eat his carrots and go take a bath. Needless to say, I didn’t get an overwhelming amount of requests to play dinosaurs with him.

When my husband and him played dinosaurs, there was only roaring and eating feet. There was no story line and the dinosaurs didn’t have to apologize for anything. My husband had more playing requests than me.

I encourage my kids to make messes and to take risks. I was somewhat of a tomboy growing up.  I think the messes I made and risks I took make up an integral part of who I am today.

My husband shakes his head any time he comes home and finds the kids playing outside in just their underwear and covered in mud from head to toe. He nearly had a heart attack the first time our daughter climbed up the monkey bars at the park and went rushing to her side. I sat on the grass calmly taking it in with a smile across my face. He is the one who put a halt to the kids walking on rocks to cross a stream last year after I already gave them the go ahead. 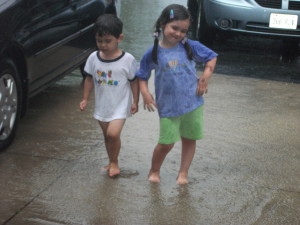 Today I will say “Parenthood is an Art.” It takes a lot of creativity and humor to make it through!

31 thoughts on “Mothers and Fathers”