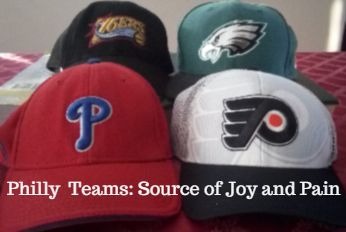 By all accounts, the Oilers are the better team and are deservedly heavy favorites. But the Flyers are gritty, well-coached, and determined.

And I can’t take my eyes off the game. I’m mesmerized by the back and forth action. Is there a way to make myself not blink? The intensity brings me to chest pains.

The Flyers would go on to lose the series in seven games. Some have called it the best series of all time. I don’t know about that. I do know that it is as passionate as I have ever felt about a sports team.

I watched every moment of the action.  Some of that viewing time was with other people including family and friends. We talked a bit – about the game and other things. It was nice.

But being in my room, by myself, watching the games… It was intense.

And herein lies the dilemma.

Every serious sports fan dreams of his/her team making it to the sport’s championship round. Ahh, isn’t it great to have your team be a winner.

While I’m still passionate about sports, it’s nowhere near the same now as compared to my teen years.  As I said in a Facebook post, “As I’ve gotten older, I’ve come to realize sports is merely a pleasant diversion. However, it’s pleasanter when the team(s) you root for win.”

Anyway, in case you do not know, the Philadelphia Eagles are in the Super Bowl (against the New England Patriots). To say I’m excited is an understatement.

The Eagles, on the other hand, are being led by a backup quarterback, Nick Foles (after their MVP caliber starter, Carson Wentz, was injured during the season). Foles contemplated retiring a couple of years ago due to frustration and disappointment with how his career was progressing.  The Eagles have a number of players who were low draft picks and others who were free agents.

Unsurprisingly, the Eagles are underdogs in the Super Bowl and opened up as the biggest underdog since 2009. They’ve been underdogs through their first two games in the playoffs despite being at home and the number one seed in their conference. Rather than being daunted by the underdog label, they’ve embraced it and used it as inspiration. Some team members and fans have been wearing dog masks. This underdog status has the made team even more lovable.

So, how do I view the game?

The Super Bowl has become an event. It’s about the commercials. The national anthem. The halftime show. The food. etc. it’s fun.

But do I want fun? Or do I want to WATCH the game?

My oldest brother, HB, invited us to his house for a Super Bowl party. He invited my other siblings and other family members. Watching and hopefully, celebrating, with my family sounds pretty great.

So, I’m getting off the island, leaving my room. We will go to my brother’s house to watch the game. I’ll enjoy their company.

But I’m still not missing one moment and might even feel a pain or two.

4 thoughts on “Leaving My Room”