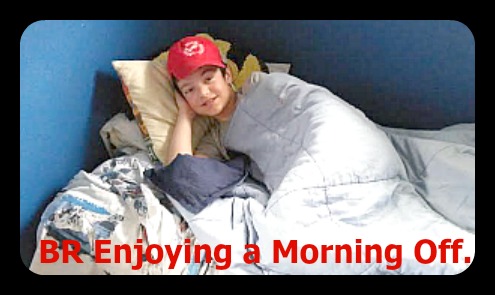 I think it’s possible that the greatest gift one person can give to another is to accept the other person for who they are.

I think one of the greatest responsibilities a parent has is helping his/her child become the best version of him/herself.

And therein lies the dilemma.

When do we parents say, “This is my kid. He/she is fine the way he/she is.”

BR has had some social challenges, for various reasons, over the course of his life.  Mrs. MMK and I have tried a number of avenues to help him overcome these challenges. Some of our attempts at assistance have clearly helped, others clearly didn’t, and still others the results have not been clear.

Point being we have tried and continue to try to help BR be the best version of himself – in every aspect.

About six weeks ago, BR had his 12th birthday. While he’s far from done growing up, developing, and changing, his patterns and nature have been set and are tough to alter.

This year, BR entered middle school. Since the beginning of the school year, I’ve seen him make some major strides in a number of areas including socially. Yet, he has little interested in socializing with the students after school.

And Mrs. MMK and I don’t get it. He’s past the age where we can call another parent and arrange a playdate. We’ve learned that that is not cool in middle school. We’ve also had to grow since he entered middle school.

But, we do push – as evidenced by the exchange above.

Yet, maybe we shouldn’t. Maybe, we should appreciate that the energy it takes to deal with people throughout the day leaves BR uninterest after school.

Maybe we should recognize that he seems content with the situation.

Maybe, we should see that he’s an introvert.

Would it be a surprise if he’s an introvert? He’s got two parents on the shy side who have introverted tendencies.

But I didn’t want that for him. I didn’t want him to have suffer the challenges that I went through – particularly as a child – of being painfully shy. Like every parent, I just wish my children could have gotten the best parts of my wife and me – and leave the other stuff behind (No, I don’t want a mini me or an MMK II – not at all!). Well, that ain’t the way it works.

Everyone has things to overcome or deal with. For BR, maybe he will have to learn to deal with some introverted tendencies. Plenty of people have done just that and utilized those tendencies in positive ways.

I hope that BR will be such a person. And Mrs. MMK and I will do everything we can to make sure that’s the case.