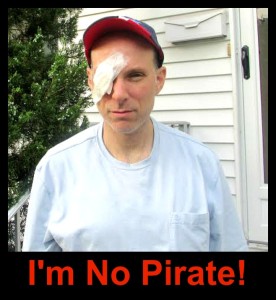 I was in Midtown Manhattan leaving a meeting and on my way to a second meeting. I got in the elevator, pressed L for lobby and waited. I ended up in the – part of the building. Apparently, I had taken the service elevator. Who knew? Anyway, I was trying to navigate out of the building, I heard a crinkling  sound. The next thing I know my eye itched.

I finally made my way out of the building, got through the second meeting with minimal eye rubbing, and went to the Port Authority Bus Terminal. While waiting for the bus, my eye started to really hurt.

Fast forward and stubborn MMK doesn’t want to do anything. I don’t want to go to the doctor, don’t’ want to take medicine, don’t want to put on compresses. I’ll bear it , go to sleep, and wake up, and everything will be fine.

Sleep is always my first line of defense. I got it from my mother for whom sleep was always the first suggestion she had for me when I was sick as a child. She suggested it like a computer technician suggests turning your computer off and on whenever your computer is having issues.

Anyway, sleep was the plan

It turns out that it was a crappy plan.

I woke up and was still in pain. Despite Ms. MMK’s attempts to check for and remove any particles from my eye, nothing changed. Don’t blame her – I was not a good patient. Lots of blinking and dripping. After theses attempts and a shower, I finally scheduled and appointment with the doctor.

The doctor delivered the news an abrasion on the cornea. There was nothing in my eye. All the rubbing got the item out. However, it also scratched my cornea or the initial contact did.

What I do know is I have to go all Captain Feathersword till tomorrow. Uncomfortable, awkward, but no big deal.

My only regret is not going to the doctor earlier like Ms. MMK suggested. If I had, I’d be further along in the process.

However, I’m a typical guy in that respect. I recently had my annual checkup which was actually 18 months after my last checkup. Ms. MMK had been bugging me to make that appointment for months.

“Alright, I’ll do it.” But I was in no rush. I felt fine – okay occasional issues but nothing serious. So, why bother.  In the end, I went as much for her as for me.

Thankfully, the doctor proclaimed me fine.

Anyway, that’s two doctor appointments in less than a month. Uggh. I’ve had enough doctors for a while.

Next thing you know, I’ll have to stop and ask for directions.

Last week was Men’s Health Week. This helpful graphic was created by Oscar Health Insurance Company to remind you about proper medical upkeep.