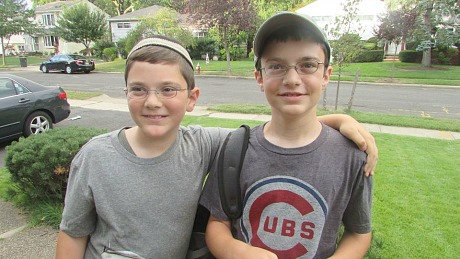 Beginnings can be scary, intimidating, and upsetting. They also can be fun and exciting. Plenty of times, they’re both.

Pictures are floating around Facebook of parents sending their children off to school for the first day. Smiles abound. It makes me wonder what if every day was the first day of the school year.

We all know the declarations of I hate school, meltdowns over homework, drama over who is not talking to who, late nights of preparing projects, discussions of is school really necessary, etc. are coming. It’s as inevitable as the sigh of relief that comes with the final days of school countdown begins.

So, wouldn’t it be cool if we could bottle the joy that comes on the first day?

Seriously, my tween, BR has been declaring, “I hate school” for weeks now. Disheartening but not all that surprising. Raise your hand if you didn’t go through this phase at some point. Probably more hands are up at the warm-up act of some third-rate band. Anyway, I know my hand would not go up (ironic since I am now teaching).

With BR’s attitude stated clearly – what do you mean we have full day – why, I worried about the first day of school. Would it be hard to wake him up? Would he be a crank in the morning? Would he try and find a way to get out of going?

It was beautiful. By the time I got home from morning prayers, he was dressed and ready to go. Of course, there were thirty minutes until he could actually go. He was bouncing around the house till he finally could leave the house. The enthusiasm was off the charts.

Ahh, first days. Maybe, we could bottle ‘em up.

Then, there was SJ’s morning. While he was not as vocal about not wanting to go back to school, he was awfully comfortable playing on his Kindle for hours and going to bed late. More noticeably, he was not his usual enthusiastic self when it came to going back to school..

When I got home on that first day, SJ also was dressed and ready to go (well, he was on his Kindle). He actually made a comment about his clothes. He felt his new BB-8 t-shirt was off center.

Really? Actually, SJ was right. It was the way the shirt was designed. But he actually cared about his clothes. Most days he puts on the clothes that are laid out for him and does not even realize what is he wearing (I just asked him what is on his shirt, and he had to look down to answer.).

On that first day, SJ was clearly excited about making a good impression.

Both Mrs. MMK and I picked up the boys after school. I was sitting on a bench when BR bounded up (Mrs. MMK went to find SJ). He gave information without even being asked. Fellow parents of teens and tweens – tell me how often does that happen?  Pretty much never here as well. The kid was happy!

Later when SJ and I were walking to the car, he informed me that this year’s teacher might just end up being his favorite. He then went off on all the things he liked about her.

As my family and I drove home, BR and SJ continued to talk about school, answer questions, and smile.

And hoped – that they would remain enthusiastic, learn all kinds of new and interesting information, continue to be curious and determined, and enjoy old friends and new ones too.

If every day was the first day.

10 thoughts on “If Every Day was the First Day”