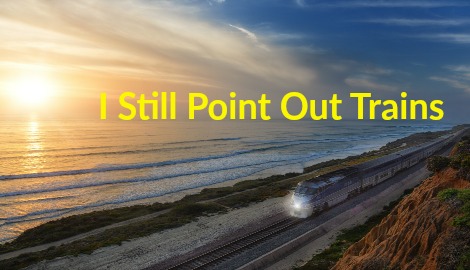 My boys aren’t young anymore. Not everything they do is cute. They can be downright annoying, real p.i.t.a’s.

If asked, I’m nearly certain they would say the same of me at times. They’re probably right too, but that’s another story.

We have two tweens in our house. If a Geiger counter was set to detect eye rolls, annoyed sighs, and sarcasm, it would explode as it passed by our house (it also would explode if it was set to detect the use of the words annoying, shut up, stupid, and idiot – BR and SJ speak to each other like this all the time. It’s lovely, just lovely. Let me tell you.).

Maybe, we are and maybe, we aren’t. I don’t know. Anyway, I suspect our situation is probably similar to many people out there.

Such is life, particularly with kids in this age bracket.

Yet, I still point out trains. I remember when seeing a train and pointing it out while we were driving intrigued everyone and could make us all happy. It was the MMK family’s version of a rainbow.

“Boy’s look. Look over there.”

“Look out where daddy is pointing. Just follow my finger, and you’ll see it.”

And they would follow my finger. And they would stare and ask questions, “Where is it going? What is it carrying? How long is it? Do they know Thomas the Tank Engine?” A simple and sweet conversation.

Back in the day, there were occasions where I took my boys on train rides from the station near us to the main terminal in Secaucus (New Jersey). What did we do when we got there? We rode the escalator up to the main floor. We’d get a snack and then ride the escalator back down to the tracks and come home. The whole time on the train the boys would have their faced plastered to the window staring out as if fascinated by the scenery. We discussed the stations and other mundane train stuff. This was a Sunday event. And they loved it.

Now, I see trains and point them out, but no one cares. It doesn’t stop arguments or cause either child to lift his head from whatever electronic is occupying his time.

The rainbow has washed away.

At best, there’s a bored sigh and a “so what?” or an “and?” This could lead to a remember when conversation which my boys occasionally tolerate. Mostly, it’s Mrs. MMK and I getting nostalgic and the boys getting bored.

In a week, BR will turn 13. For us, this means Bar Mitzvah. Another validation of time passing.

Despite their bored sighs, I’m enjoying the journey. Despite the occasional arguments, I treasure having a front seat to their development and growth. Despite the periodic yelling, I appreciate trying to guide them towards a path I think is best for them.

Just hope they are enjoying the journey too.