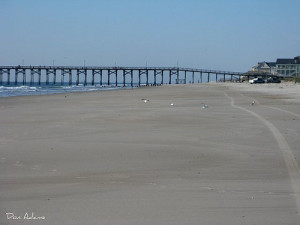 “But he said today we’re at 20th street.”
My wife, children, mother, and I gathered our beach chairs and other paraphernalia and trudged back over the sand and to the car.
Fifteen minutes later.
“Where are they? Do you see them?”
“No.”
I dropped the stuff, set up camp, and plopped into my beach chair.
“Hey isn’t that B (my cousin) waving?”
“Yup.”
Thirty minutes, two parking space searches, three walks across the hot shell infested sand, fourteen sighs, a gallon of sweat sweated off, and we finally found the rest of the family.
As we setup camp, my mother came over to me and made a declaration.
“I just want to let you know this is my last day at the beach.”
“Huh. I know it was a pain getting here and everything…”
“You don’t understand. I don’t like the beach. I hate the sand. I like a pool. I only come to be sociable. I like hanging out with everyone.  I’ve been coming to the beach for 70 plus years, and I’ve had enough.”
This was not said in anger or frustration or sadness. It was simply a declaration made by a woman who reached her breaking point.
“Okay. If that’s the way you feel.”
I think she was expecting an argument or a plea. Others did attempt to talk her out of it. But why? You get to a certain age or station in life and you can do whatever the heck you want. So if that’s what she wants, fine. I hope she changes her mind, but I’m not counting on it.
I embraced the decision. And came up with suggestions on how to mark the occasion.

In the end, none of these things happened. Instead we simply had a nice long day at the beach.  A family day – you know the kind: talked, laughed, enjoyed the waves, dug in the sand, played paddle ball, took some pictures, and snacked. For her finale, my mom went into the ocean and got wet up to her knees (this is a big deal).

While I do hope, my mom changes her mind, I am not going to try and change it for her. Instead, I say thanks for doing something for me and your other children, and grandchildren even though you did not enjoy it. Thanks for taking us and then joining us at the beach. It won’t be the same without you. 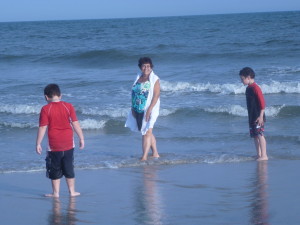 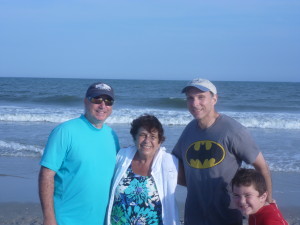 10 thoughts on “I Retire From The Beach”