I was laughing. A lot. I was lounging on the sofa after I had finished working out. The time was approaching 8:26. Why, you may be wondering, does that matter? Well, 8:26 is the witching hour for my older son, BR. BR’s bedtime is my responsibility. In our division of labor, my wife serves as the beddy bye conduit for SJ, and I handle BR.
After flipping through the channels, I settled on the movie Grown Ups with Adam Sandler. Yes, an Adam Sandler movie. I was in the mood for some dumb laughs. Besides, I only planned on watching it till 8:26. Well, in the right mood, Adam Sandler can be pretty darn funny. 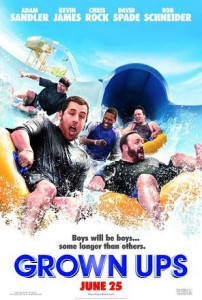 BR, who was playing some computer game heard my guffawing. Curious as to what was so funny, he came down and asked. BR curled up next to me, and we started talking. Now, say what you like about Adam Sandler, but his movies are generally not appropriate for 8-year-olds. Well, so between the movie and the clock hitting 8:26, I had my cue to get up. But I didn’t. I was comfortable, enjoying hanging out with my son, and so I made the call to watch together for a few minutes. How bad could it get?
Then, a boy of about six walks up to his mother played by Maria Bello. He tells her that he’s hungry and the next thing you know, he is breastfeeding. I snickered a bit and went silent though the thoughts in my head were racing. Please don’t let him ask about this. I don’t want to talk about this now. Why didn’t I take him up at 8:26?
“Why did you laugh?”
“Um, I don’t know. It was funny.”
“What was funny?”
“Well, the fact that kid is getting to milk from his mother.”
“I don’t get it.”
“He is six or something like that and still getting milk from his mother.”
BR looked confused. I went on.
“It’s perfectly natural for a baby to get milk from his/her mother.”
“How does a baby get milk from his/her mother?”
I opened the can of worms. I might as well keep going. “Well G-d makes a miracle and a woman is able to give her baby milk from her breast?”
“How’s G-d do that?”
“I don’t know. It’s a miracle. Pretty cool right.”
“Yeah.” He looked confused.
I didn’t know how to continue. My wife walked in. Save me. “You know you got milk from mommy. How long did you breast feed BR?” Oh, the look I got.
“Six months.”
“I don’t remember.”
“Of course you don’t. You are not supposed to. If you are old enough to ask or remember, it is too long.”
“How long do most babies do it for?”
“Well, it depends. Some go to 6 months like you did, some a year, a year and a half. Maybe even two years.”
“Oh. Babies come from where mommie’s would have penises right?”
“Right. But you know mommies don’t have penises right? We talked about this before.”
“I know. What’s it called again?”
“What?”
“What do they have instead of penises again?”
“Do we really have to talk about this?”
“Just tell me please. “
“Fine. They are called vaginas.”
“What?”
“Vaginas. They are called vaginas.”
“Why are they called that?
“I don’t know. They just are.”
“Oh.”
BR paused, as he was probably thinking or processing. It was an opening. I put him on my shoulders and up to bed we went. No more questions tonight.

29 thoughts on “Grown Up Questions”