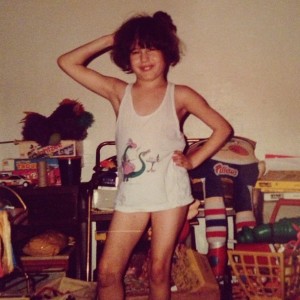 I literally “woke up like dis.” Look at my hair.

In a recent post I introduced you to my colleague Lady Snark or Maria M, if you want to be formal. Remember she came up with the winning entry for my winter cold comments?

Let me tell you a bit about Lady Snark.

She is a Brooklyn native, writer, technological wizard, and cock-eyed optimist. And a darn good teacher who cares passionately about her students.

She also blogs about education and her experiences in the classroom.  Check out Maria’s blog.

Before you head over to Maria’s blog, read her guest post below about her transformation from a Pumpkin head to competent and confident woman.

Pumpkin head. That was my nickname.

I grew up ugly. Actually I was born ugly. All babies are supposedly cute, but my grandmother nailed it. “Pumpkin head.” I had a huge noggin and fat cheeks and was a rather big baby. And I looked like a boy until I was age three.

Things didn’t improve until much later: age twenty-five. I went through bad teeth, big glasses, unfortunate haircuts and the fashion of the 1980s and 1990s.

My family didn’t have a lot of money when I was growing up so fashion was not a concern my parents took too seriously. And my dad’s family insisted on baptizing my matrilineal Jewish three-year-old behind, much to the chagrin of my mother’s family. (But it did not negate my Jewishness.)

As I approached my quarter life, I did not go through a crisis, but a transformation.

I moved out of my parents’ home, got hired as a teacher and began to forge a life for myself. I began taking control of my life and my image. I dressed better, put more care into my appearance and looks…for ME.

In my predominantly religious Jewish neighborhood, I am an old maid. I should have married years ago and be on my third child by now. Even my accountant, who congratulates my success, laments the lack of a “nice Jewish boy” in my life. I smile politely. I check my shoulder for an expiration date. None exists.

No ill-conceived baptism or lack of nuptials negates my femininity. Or Jewishness. I am an independent Reform Jewish female.

It’s hard to pinpoint the exact moment when I stopped caring about others’ opinions.

Maybe it was when I found my apartment on my own, while working a $300-a-week job.

Or when I realized that having two degrees by age twenty-three was an accomplished feat.

Or when it was when I bought and assembled my own furniture.

Or when I found my first teaching job (in the South Bronx) without any connections.

Or when I decided I wanted straighter teeth and paid for it in small increments thanks to insurance and a steady paycheck.

Or when I decided I am beautiful and comfortable in my own skin.

Or  when I decided to not get angry with the naysayers, because I wanted to be better than that.

Or when I got out of a miserable relationship that was weighing down my very soul and knew I could do better.

Or when I decided in my fourth year of teaching that the feeling of hopelessness I felt four months into teaching was not how I wanted to experience my career.

Or when I finally found a school that makes me happy and made me fall in love with my profession all over again.

Or when I decided I determine my own happiness as a [single] woman, a Jew, a teacher, and a human being.

As Robert Frost said: “In three words I can sum up everything I’ve learned about life: it goes on.” And I will go on, embracing positivity and using my newfound power to make others and myself happy.

7 thoughts on “From Pumpkin head to Confident Teacher”