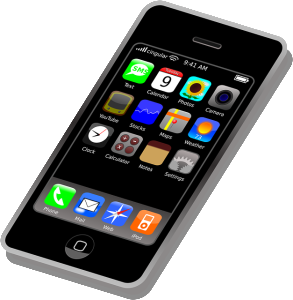 I was a late adapter to smartphones. I saw people constantly on their smartphone and wondered, “What are they doing?” I saw a woman on the bus who feel asleep holding her smartphone on her lap as if it were a child. She might as well have caressed it and said, “how sweet.”

Yet adapt I did. I got a smartphone after tiring of hearing my students teasing me about the stone age. Besides, I wanted another option for those long tedious bus rides.

However, I promised myself I would not use be one of those people who is constantly checking his smartphone. Communication and information does not have to be instant. In other words, the smartphone would not be my third child. The children I have keep me plenty busy.

Our recent family vacation to Disney World was the most significant trip we ever took. Each of us was excited to go. While flipping thought the radio stations on the way to LaGuardia airport, we heard the song by American Authors. The chorus came on:

At that point, SJ said, “It’s true. Actually, it’s going to be the best week.” Yes, we were excited and the bar was set high.

By that evening – after a safe flight –and a visit to Downtown Disney, each of us had a meltdown. I thought Disney World was supposed to be the happiest place on Earth. I chalked it up to us being over tired and over excited.

Yet, I was determined to have no more meltdowns. Well, at least none would be because of me. I would be calm. I would be easy going. I would enjoy myself and encourage the rest of the MMK family to do the same.

Things got better. Much better. Sure there were bumps along the way. Don’t even ask about Animal Kingdom (though we did enjoy the Kilimanjaro Safari). In fact, despite the rain, long lines and heat, we saw and did a ton of things at Disney World!

At the end of each day, we would comment on what we liked best and our favorite rides. Soarin (my favorite), Test Track, Splash Mountain, and It’s a Small World (Ms. MMK’s favorite) are the attractions that most impress our family. However, there were many more. 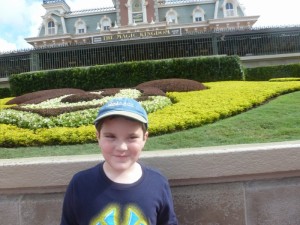 SJ at the entrance of Disney’s Magic Kingdom

While we waited in those long lines, I often pulled out my smartphone. I was looking at messages, checking out some websites, etc. Some of it was important as there are some things going on (deliberately vague – will come up at some point on the blog) but nothing was urgent.

On Monday, we were in the Magic Kingdom waiting to go on Peter Pan’s Flight. I pulled out my smartphone. BR said,

What are you looking at?
Some messages.
Can I see?
Nah. You wouldn’t be interested.
Are you?
Interested? Yeah, some what. I’d like to see it.
Well, can you put it away then?
What?

I looked at him. His request caught me by surprise. Was it bothering him that I was looking at my smartphone? Did he feel neglected? Did he want more attention?

I didn’t ask these questions. I simply put the phone away. BR is 10 years old. He was on the biggest vacation of his life. He wanted to be in the moment with his father. The heck with the smart phone. I went on vacation to enjoy time with my family. Not with my smartphone.

I know there will come a time when BR and SJ are teens and spending time with Dad won’t rank up there as a favorite thing to do. I’m not looking forward to that time. At all. Anyway, if my son(s) want attention and I can give it to them, then I will. Besides this was a vacation. Nothing was so urgent.

I’d like to tell you I gave my boys all my attention the rest of our vacation. Unfortunately, I’d be lying. I still checked messages, though more so at night (I barely even did that after Wednesday). More importantly, I strove to be in the moment and cognizant of their needs. I encouraged everyone to try rides and have fun.

We went to Disney World for vacation to have fun as a family. And we had a great time!

I don’t need a smartphone to tell me that.

Ms. MMK and I with the Magic Kingdom in the background