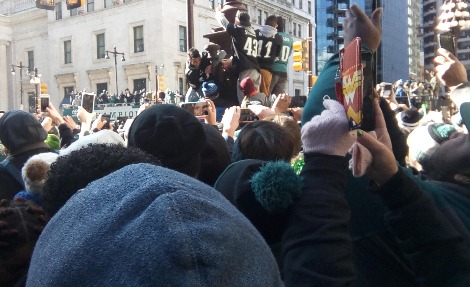 While I was thrilled by the Eagles victory, I was unsure about the Super Bowl parade. It would be packed, transportation would be challenging, and work would be missed.

But I wanted to go. I wanted to savor the victory a little longer. I wanted to be among the crowd. I wanted to cheer one more time for the Eagles players, coaches, etc. who turned this into a magical season.

So, I went. A friend of mine, IP, who is from New York but became a Philadelphia sports fan after attending a Phillies-Padres came that the Phillies came back to win, is a passionate Eagles fan. I was wavering. He was sure. Well, I had a running mate, and that was that.

The reports of public transportation closing, massive crowds, and  more would not deter us.

We made it. Easily actually. And along the way we met fellow smiley, happy, Eagles fans.

And it was as crazy as predicted along the parade route and the surrounding area.

As  we made a way to spot to watch the parade, the crowd thickened and thickened. Finally, we stood outside of City Hall waiting for the Eagles to come by.

Cigarette smoke wafed through the air. Beer cans littered the streets. And the jostling was fierce. Eventually people got frustrated as everyone wanted to catch one more glimpse of the team.

But the damn did not break. Ultimately, the mood was one of joy, delirium even. Chants of Fly Eagles Fly spontaneously broke out. Shouts of E-A-G-L-E-S were started by one person, and others joined in.

When the Eagles finally came and passed where I was standing, I could barely see them and was packed liked the proverbial sardine.

Yet, being part of the crowd and celebrating the Super Bowl victors was the objective. And it was fulfilled.

While the transportation back to New Jersey (walked over the Ben Franklin Bridge to get the light rail station which would take me to another station where my car was parked), it was all worth it.

My fellow/lady fans and I basked in the Super Bowl victory one more time.

Click here to see more pics from the parade. 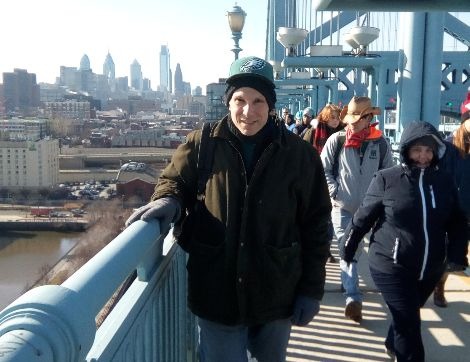 Walking back from Philadelphia over the Ben Franklin Bridge.