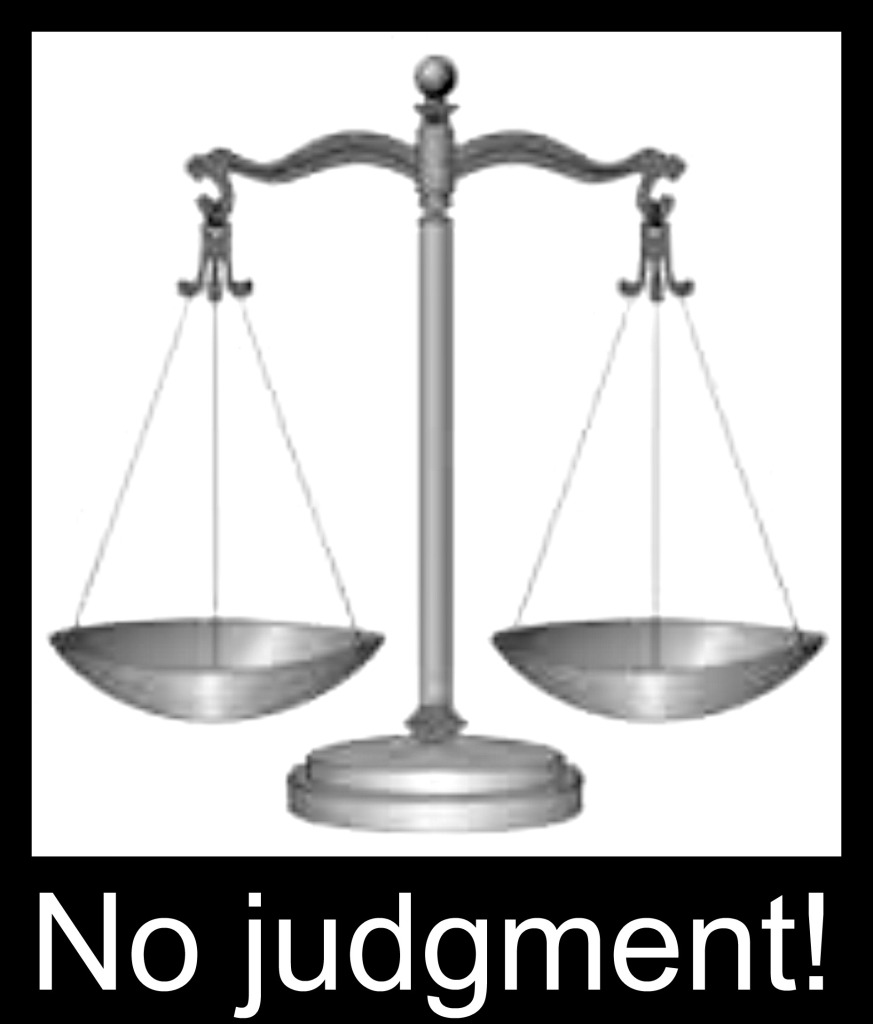 You never really understand a person until you consider things from his point of view… Until you climb into his skin and walk around in it.– spoken by Atticus Finch, written by Harper Lee, To Kill a Mockingbird

Simple, isn’t it. Don’t judge. You don’t know a person because you don’t have his/her perspective. By the way, Scout was just seven years old when Atticus gave her this advice. So if a seven year old can understand these words, why can’t we as a society?

Judgment was a theme I touched upon when I taught To Kill a Mockingbird to my high school students. Here is how I proved that we all judge all the time.

It’s the first day of school. As you walk into each classroom for the first time, what’s the first thing you do? You look at the teacher. You look at your fellow classmates. You figure out where to sit. The whole time you are judging. And this is true any time you go somewhere the first time or a place that is out of your routine – public transportation, a store, etc.

Some students would disagree with me and maybe you do too. However, I stand by my statement. We are assessing the situation and location. Is it safe? Am I going to be comfortable here? Are there potential problems here? And what is the way to get the answer to these questions?  We study the people around us, and we judge them.

Now, unless you have security training, the type of judging I described above is a snap judgment. In fact, you may not even be completely conscious of it.  However, if you see your version of the boogey man, you will certainly become conscious of the judgment and the situation.

The recent grand jury findings in the Garner and Brown cases have angered many people. Imagine if one or both of the cases had gone the other way, isn’t it reasonable to speculate that other people or groups would have been angered?

Regardless, what would have happened if the policemen and the victims had followed Atticus’ advice to Scout. Would two men be dead? Would law enforcement officials be on the defensive?

Now, in reality we need to be aware of situations and ignoring them is simply naive. Fight or flight is a natural instinct. However, if a people or group is judged prior to the charged situation, how can we expect people to act reasonably when there are heightened tensions and their adrenaline is pumping?

Since these grand jury decisions have come down, I’ve read a number of blog posts and Facebook messages and listened to a number of radio broadcasts. One of my goals has been to learn. I want to understand what is going on and why. What are people thinking when they act the way they act? A couple of my fellow dad bloggers have written things that I found interesting and insightful. Consider reading this and this.

Let’s not ignore the fact that we judge based on everything. There are the BIG issues such as religion and sexual orientation and the mundane – dress, hair style, educational level, parenting style, etc. By the way, you do like Bruce Springsteen, right? Cause otherwise…

Do you know how many of my students say something like, “I don’t care if others judge me?”  When you’re 16, there’s a lot of things you don’t care about and other things you claim to not care about because it’s easier than admitting you do.  Sure, the judgment of strangers does not have a great impact on us, at least until it does. However, we judge those closest to us as well.

How many times have you gotten angry at your spouse, your child, your mother, your friend and then realized that the reason for your anger comes from a misjudgment you made? I don’t want to admit how often I do this. Yet, it happens the most with my children. I say I’m correcting them or yelling at them because I want to help them be better. And it’s true I do want them to be the best that they can be in all ways. However, maybe they are moving slowly because they tripped in gym class. Maybe, they are talking back cause their friend ignored them during recess and it hurt their feelings. Maybe, maybe, maybe …

Atticus’ advice – it’s simple right – don’t judge a person until you consider things from his point of view. It’s so simple. Just simple.

Picture is Courtesy of Google Images