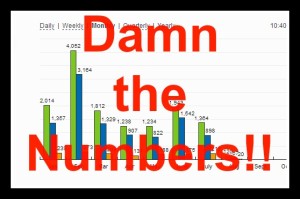 Something else has changed -DRAMATICALLY.  When I first started blogging, I didn’t know that the number of visitors was counted. Seriously, it was a few months before I stumbled upon the stat counter.

And a whole new world opened up for this numbers guy.

Yes, the stat counter changed things for me. Sure, I still had my original goals which included a desire to have people read my work. I wanted to move people which is what writing has always been about for me. With the more people I reached, the greater impact I could have.

I know this may sound egotistical, and it may be to some degree. Surely, anyone who has an artistic talent that he or she pursues can relate to this. Doesn’t every musician want their song heard? Doesn’t every artist want their painting seen? Even the most fantastic work has no impact if it sits in a closet unheard and unseen.

Since that day of awakening, blogging has changed for me. I’d write a post, put it up, and advertise its presence in various places. Then I’d check the numbers. Multiple times. If the numbers did not rise, I was convinced that my post had no impact. While I treasured the positive and insightful comments, I wanted numbers too.

I waited to go viral. I had some posts that did amazingly well. By the numbers. And I was happy. But then the next post came out and once again, I checked the numbers obsessively.

A question has been rattling around in my mind for a while now: What am I looking for? Will the numbers ever be high enough?  What good does checking the numbers do?

But I have a problem. You know where you’re on the computer and you have something that needs to get done – maybe, even work. However, instead of working you procrastinate. Maybe, you check Facebook or Twitter, or Email, or Youtube or sports scores, or the Stock Market. You know whatever floats your boat. Well, my procrastination includes a check of the numbers. It’s pointless.

However, I’ve become addicted. There, I said it.

Last week I brought this issue up in my dad bloggers group. I noted how I had become numbers obsessed and I needed to chill. I asked if there were others and if they were up for a contest of some sort. I suggested that we follow the lead of a Seinfeld episode where Jerry and the gang can go the longest without ‘You Know’. For our purpose, ‘You Know’ was checking numbers.

Well, a few bloggers took me up on this challenge. In fact, a few guys – Dad Capades, The Captain’s Log…Tales from the Poop Deck, The Father of Twins and  Dad With A Blog – have already stopped looking at their numbers. I, on the other hand, have not. However, I am ready to start. Let me be clear I do believe that looking at the numbers has value to it. I do not intend to never look at my numbers again.  I absolutely will. But, I need to be reined in.

I need to remember that blogging is about more than numbers.

8 thoughts on “Damn The Numbers!!”