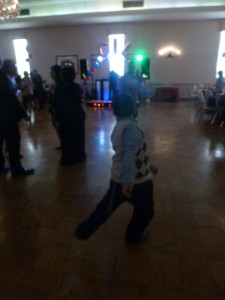 SJ showing his finest moves on the dance floor.

Did you ever look at your child and think to you yourself, he/she is just like me?

Of course you have. And in many ways, it’s kind of cool. And not narcissistic.

Today was not one of those days.

My wife and I are both on the shy side. We are not in your face sort of people. Let others have the spotlight. We’ll be fine to chill off to the side in small groups.

This weekend we attended a family bar mitzvah of my little cousin, GR. He’s a good kid with a nice sense of humor and positive disposition. My wife and I had a lot of fun at the bar mitzvah. We got to catch up with family, enjoy some tasty food, and share the joy with GR and his parents.

The day was about GR, but SJ, my soon to be 7-year-old nearly stole the show.

Prior to the buffet, speeches were being given. SJ was not interested. He stealthily went to the corner station (which was not even manned yet) to fill his plate up with noodles. As I have mentioned in the past, he does nothing stealthily. I was embarrassed to walk over before the buffet even started. SJ was oblivious.

Then, there was the open bar. Before the event was 30 minutes old, the bartender knew his drink – a coca cola. SJ eventually got cut off. Apparently, 11 cokes is the limit for a 6-year-old (no wonder why he could not shut up on the way home). I had one.

From the moment people were encouraged to come up and dance, he was at it. I danced the hora and spun him around a couple of times and then was done. Not SJ.

Even when most people had settled down to eat, he was still busting a groove. At one point, the DJ called him out.

Later, SJ ended up in a bathroom stall totally undressed.

SJ started rambling on about the toilet paper. “It fell and rolled away, so I had to go get it.”

“Wait. You went out of the stall to get the toilet paper while you were totally naked?”

I was shaking my head – mortified, “Oh my G-d. Did anyone see you?”

As I was getting him dressed in the stall, another person walked into the bathroom.

SJ called out, “Hey is someone there? What’s your name?”

“What? I’m just trying to be friendly.”

“I know, but it’s not nice to talk to someone like that while they’re going to the bathroom.”

Where did this crazy outgoing party boy come from?

24 thoughts on “Could This Child Really Be Mine?”