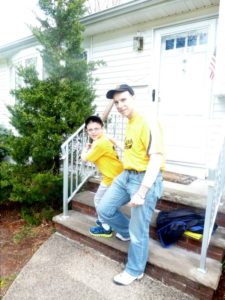 Ready to go to his first Little League game.

This is his last year in the league, and he made his goals clear.

I’ll be honest. The answer stung a little bit. My son is obsessed with winning, and nothing else matters. What kind of child are Mrs. MMK and I raising?

But then I thought about it.

Was I that competitive?

Ummm, well, yeah. I am or at least I was (Maybe still am in some ways but that’s another story). When I was in Little League, all I wanted was to play and win the championship.

When I was playing Little League, I was on one championship team. I was 10 years old, and I didn’t get to play much that year. The coach played his son and his son’s friend’s more than the rest of us.

I played outfield primarily, and the ball only got out there a few times a game. Once during practice, I had a rock catch with a friend of mine, a fellow outfielder. No one noticed.

Despite my relative inactivity, I still have a few memories of the team. We were the Giants, and we wore purple jerseys. The friend I had a catch with was named Mike. We rarely talked after the season ended.

When I was 12, my basketball team made it to the finals. We started off the year poorly – losing our first few games. Then, there was a long strike involving the schools, and the league was halted.

When the league started up again after the strike, only seven players of the original eleven returned. Those of us who returned got to play a lot, and we started winning and laughing.

I could give you a breakdown of the championship game – go all Charles Barkley, Kenny Smith, and TNT on you – but I’ll spare you the details.

While I can’t remember the name of the team of the color of our shirts (I might have a picture somewhere), the memory of that team and how we bonded still makes me smile.

Sure, I want BR and his teammates to experience a championship. Having such an experience is special. So, along with my fellow coaches, we’ll try to put the players in the best position to succeed.

However, it will be the same balancing act as past years between winning and helping the boys improve their skills.  When the only focus is winning… Something is lost.

I hope BR can appreciate that as much fun as winning is, coming together as a team is even more special. 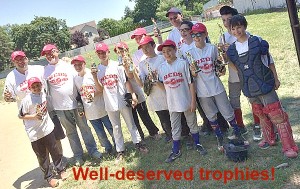 Maybe, this kind of thinking only happens with time, perspective, and maturity. Either way, I hope BR and the rest of the team enjoy the season and one day will look back upon it fondly.