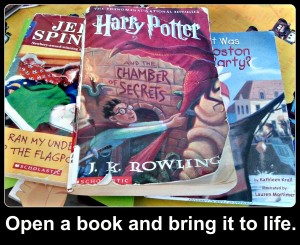 As an English teacher, I had shelves lined with books in my classroom. Students were given time to read in class. All they had to do was select a book of their choice –I was there to offer guidance – and enjoy the journey. Some jumped in and relished this part of the class. Unfortunately, many of the students saw this part of the class as a time to go off task. I’m sure there were many reasons for choosing not to journey. Some of those reasons were probably legitimate while other reasons probably revolved around a student and what he/she wished for rather than what the teacher asked of him/her.

And a great loss it is.

Recently, BR and I brought Harry Potter to life. Yup, BR was the last 10 year old (and I the last adult) on Earth who had not read or even seen a Harry Potter movie.

It wasn’t for lack of encouragement. In fact, I’ve been trying to get BR to read Harry Potter for a couple of years now. I’d bring it up to BR periodically, but he would nix the idea, “I don’t like the magical stuff.”

I don’t know if he even what he was talking about. I think he just likes to be contrary sometimes. Anyone else know a kid like that? Anyway, after talking to my dad blogger friend, Whit Honea who has two boys who are similar in age to BR, I decided to try again.

And BR cracked. Pretty easily, I might add. He must have been ready because he doesn’t crack that easily normally. Chocolate can help in that process by the way. Just saying.

Now, we are in the middle of the second book, Harry Potter and the Chamber of Secrets. We have learned about Gilderoy Lockheart, Moaning Myrtle, Dobby, Nearly Headless Nick, and more.

Yes, a new world (not to mention the fact that if either one of us ever goes on Jeopardy or gets into crossword puzzles, we will have a much better chance of success) has opened up to BR and I. We have learned about friendship, good and evil, loyalty, courage, etc. We have traveled to England – both real and imagined places.  We have joined a young boy as he journeys from outcast to hero. We brought Harry Potter to life, and he is giving back so much more.

When we finish Harry Potter and the Chamber of Secrets, we’ll take it back to the library, and it will go back on the shelf. The book will wait with all the others till someone else checks it out and opens it. So, go grab a book, open it up, and bring it to life. A new world is waiting for you.

Don’t you love to read?