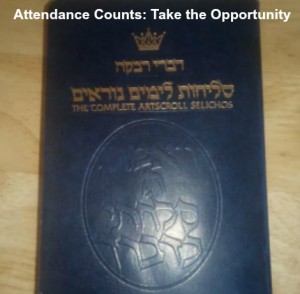 It’s still dark out when I arrive in the synagogue parking lot. As I enter the building, I try wiping the tired out of my eyes.

Over the past two plus weeks, morning service has started extra early. This is necessary in order to go through the selichot prayers (During these prayers, we ask for forgiveness not on account of our capabilities but primarily through God’s 13 attributes of mercy, which are the central theme of the service.).

These prayers culminate on the morning before Yom Kippur. This year Yom Kippur arrives on Tuesday night. It’s known as the Day of Atonement and is considered the holiest day of the year. This day provides one an opportunity to repent for past sins, missteps, etc, (as well as a time to ask for — in the new year). However, true repentance does not happen in a day.

So, over the past two plus weeks (they began the Saturday night before Rosh Ha Shanah), the selichot prayers have been said. When I close my selichot book on the final day that they are to be said, I will have gone through more than 800 pages of prayers.

I have been at the synagogue every morning on time for this extra prayer. While I’ve made it to synagogue promptly and read each of the 800 plus pages, there have been large chunks of time where my concentration wavered greatly. I turned pages and did not recall what I had read.

Despite lacking concentration while going through selichot, I am proud of myself. Simply making it to synagogue on time for these past two plus weeks and going through this lengthy book is an accomplishment. Showing up is admirable. Being there matters, and it is the first step in any process. While the G-d I believe in takes note of effort, he respects attendance and intentions.

I did not get as much as I could have out of saying the selichot prayers. I missed an opportunity. However, I said each prayer and showed up which makes me feel as if I accomplished something. Is there any better thing to feel than a sense of accomplishment?

I’d say no. The sense of accomplishment leads one to further and greater action.When I close the book on selichot, I’ll be proud of what I was able to accomplish. My goal  is to utilize the inspiration I took in and move forward.

The G-d I believe in recognizes this. What a feeling of comfort!