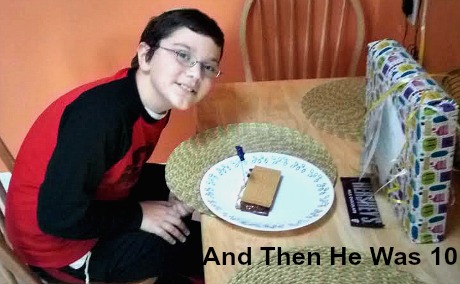 Hey Dad, look at me.

SJ, my younger son is no longer 9. He has said goodbye to single digits. And then he was 10.

Not momentous in a way where everything is radically different. He’s not going to high school, learning how to drive, having his first beer, moving out of the house, starting a job, or getting married.

But momentous in that adding that second digit means he is older. He is not a baby, toddler, or even a little boy.

SJ has been showing some of the moodiness of that age group for a while. He is no longer perpetually happy-go-lucky. It’s only a sometimes thing now. He appreciates his space. He is easily annoyed.

But it’s not the moodiness that makes it momentous.

The other day I asked SJ what he might want to do when he grows up. His response: An Air Force pilot or a Historian.

What? When did these serious professions come up? I still remember when his answer to that question was Thomas the Tank Engine.

He is growing up. The thought of him being older – a teen, high school student, college man – does not seem as vague or distant. I see it happening.

Recently, while we were walking up to the waiting area at school, he told me he didn’t want me to hold his hand.

What? I knew it was coming, but I wasn’t ready. And I told him so.

“You can’t stop this just like that. I need some warning. I need some time to adjust. This hurts, you know. Can’t we have more time?”

“This is just for today.”

I finally get what it means to be the youngest. He’s my baby. But he’s no baby.

I’m the youngest of four boys. But I hated being called the baby. In my eyes -I was no baby. I didn’t want my mother, or anyone for that matter, to call me a baby.

“But you’ll always be my baby.” I don’t know how many times I have heard my mother say it. I still don’t like it.

But I get it now.

SJ has been engaged in the election. He’s asked questions, watched speeches, and debated the pros and cons of each candidate.

SJ reads books on famous scientists and asks questions about historical events (Thank you to Lauren Tarshis’ I Survived series of books.)

SJ is interested in and wants to know about me. He asks me all kinds of questions about my life growing up and what different family members were like.

His world is no longer just about him. He sees beyond and has concerns, interests, joys, and frustrations that are outside of his own sphere.

This is the mark of a mature/ing person.