The ingredients were purchased. 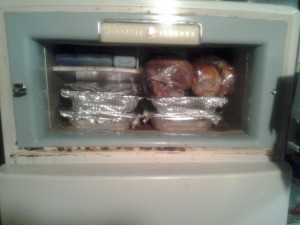 The food was made.

The house was cleaned.

The chairs were arranged.

The gifts were bought.

And then came the phone calls. Texts. And emails.

Forty two people were supposed to be in my home today for a Post-Chanukah Chanukah party. That’s nearly as many Jews as went down to Egypt during Jacob’s time. It’s also nearly every relative I have from my side of the family (other than those that are out of country). And each relative was going to bring a dish to complement the food that my wife had already cooked.

Why didn’t this party happen today? The darn weather! Here in the North Jersey area the weather was fine till late in the day. By Sunday evening light snow was falling.

However, the majority of our guests are coming from out of state. Suburbs of Philadelphia to be exact. And the weather in the city of Brotherly Love was not nearly as accommodating. Snow, ice, sleet. Terrible driving conditions.

Maybe we should move somewhere warm, like Texas. Whoops, that’s not going to work either.North Texas ice storm might be arriving a little ahead of schedule. Icemageddon.

So, the cancellations came in. First, it was my next older brother. Bummer, he and his children will be missed, but the party would go on.

Two hours later three more cancellations within a few minutes and the great Post-Chanukah Chanukah party of 2013 was no more.

And I’m sad. I was scrubbed and excited. I wanted to play host. I even had a speech in mind. I was going to be witty.

Well, my freezer is full – too full.

Luckily, when we moved in, this Arthur Fonzarelli style frigerator/freezer was left in the basement. I guess Mr. and Mrs. C. didn’t need it anymore. Anyway, I hate leaving this extra frigerator/freezer on as it drives up my electric bill faster than Danica Patrick completes a lap at the Indy 500.

Yet, we have no choice.  The food must be saved.

We might have a make-up date for a post-Channukah Channukah party. Schedule permitting.

If not, here at MMK headquarters we have alot of extra food. So, if you’re in the area, make sure to stop by. We have enough for many guests. And all are welcome. Happy Post-Channukah Channukah party.

23 thoughts on “All Dressed Up and Nowhere to Go: The Party That Never Was”