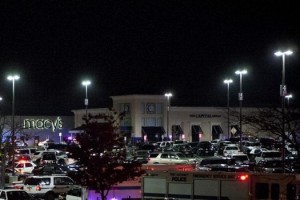 I should care. I should be worked up.
Scared.
Nervous.
I should feel something.
Yet, I don’t care.
I’m trying to care.
Earlier this week, a gunman entered the Garden State Plaza mall in New Jersey at 9:30 P.M. He fired a number of shots at the security cameras. Customers and store workers were trapped for hours as police searched for the gunman.  Police found the gunman dead at 3:20 A.M. due to a self-inflicted gunshot wound in the head from a rifle.
The 20-year-old was a known drug dealer. The news outlets have reported his goal was to die by the hand of police in a blaze of glory.
Why exactly he wanted this type of end? Well, that has not been reported or is simply unknown.
The Garden State Plaza, the biggest mall in New Jersey, is located 5 minutes from where I live.
I have seen many movies at the movie theater that anchors the Garden State Plaza. I have put my children on the carousel that dots one of the main thoroughfares of the Garden State Plaza. I have checked out clothes at the Macys located in the Garden State Plaza.
So, this madman shooting up the place should bother me – shouldn’t it?
It’s close to home. I could have been there. My wife and children could have been there. I actually know someone who was there (the boys’ babysitter).
But I can’t seem to get too worked up about it.
It’s not because no one was murdered. Thank G-d a million times that a human tragedy did not occur, other than a drugged out 20-year-old wasting his life in a terribly sad way.
No, that’s not it.
I never thought that I lived in a bubble and was safe from tragedy. I watch the news and read the newspaper. Hell, I live just outside of New York City and travel the city every day. I am not naïve.
Everyone I know, myself included, has a 9/11 story.
I shook my head and fought back tears at other such events throughout the country and beyond.
But for the Garden State Plaza shooting, I am indifferent. I don’t really feel a need to know all the details. It happened and it sucks. I get that. Okay, what’s next?
This is our world today. Random shootings in public places happen.
As much as it sickens me to think, read, and write that, I know it’s true.
And there ain’t a damn thing that I or anyone can else do about it.
Maybe, I am becoming desensitized. What choice do I have?
Details of the event were gleaned from the Newark Star Ledger
http://www.nj.com/news/index.ssf/2013/11/garden_state_plaza_mall_shooting_suspect_killed_himself_in_store_source_says.html#incart_maj-story-1