Those words mean little to most people except for those who were watchers of the show Cheers. On a particular episode, (https://www.youtube.com/watch?v=aEtTtfOGkx8) the fictional drink, Screaming Viking, enables Sammy to get his job back.

The new bartender swears he can make any drink and promises to quit if he can not fill a drink order. When the Screaming Viking is requested by all the guys including Norm and Cliff, the new bartender leaves, and Sammy gets his job back. As soon as Rebecca Howe turns her back, everyone spits the drink out.

The Screaming Viking which includes bruised cucumbers is gross. The combination of liquor and cucumbers is apparently nasty. They just don’t work together.

END_OF_DOCUMENT_TOKEN_TO_BE_REPLACED 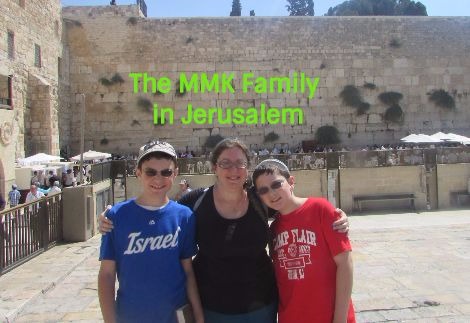 In August, my family and I took a nearly two-week vacation to Israel. The trip was part of the celebration of BR’s Bar Mitzvah. As you can imagine, such a trip took a good deal of planning. Thanks Mrs. MMK – yes she did the mass majority of the planning.

Anyway, as excited as I was for the trip, I had a nagging feeling that it was too short. After all, while Israel is a small country, there were many things to see. How could we hope to see all of the country, or even a lot of it, in such a short time?